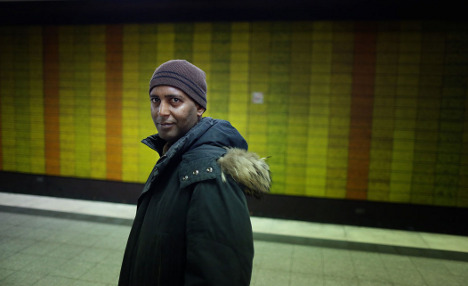 Online campaigners are organising a protest march for Thursday evening in support of 41-year-old electronic engineer Derege Wevelsiep, who says he was attacked by four police officers last month.

Wevelsiep, an Ethiopian who was adopted by German parents as a child, claims the attack occurred following an argument with ticket inspectors on the Frankfurt metro on October 17th, the Frankfurter Rundschau newspaper said on Thursday.

The police dispute Wevelsiep’s version of events, and say he provoked them by calling them Nazis.

Hesse’s internal affairs parliamentary committee will consider a proposal to create an independent complaints office for victims of racist violent crime, with opposition Green Party and Social Democrat (SPD) politicians demanding a full investigation into the accusations of racist violence by the police.

Green party politician Jürgen Frömmrich warned that police should not be able to “stick together” to avoid prosecution, wrote the paper.

Wevelsiep says he was travelling with his fiancé on the train late at night when they were checked by ticket inspectors. He showed them his monthly ticket – which entitled both to travel – and then got off, leaving his ticket with his fiancé so she could continue her journey.

She was then checked again, and the new inspectors accused her of trying to use the ticket to allow another black passenger to travel, Wevelsiep told the paper.

After being taken off the train by the inspectors, Wevelsiep said his fiancé phoned him and he hurried over to help her.

The police arrived and demanded to see Wevelsiep’s identification, which he did not have with him. Wevelsiep says he was then bundled into a police car and driven home to fetch it. On the way he refused to be handcuffed by police, he told the paper, and was punched in the face by one of them and knocked out.

Wevelsiep said the police forced their way into his flat and simply dumped him there unconscious. He spent three days in hospital with concussion and bruising all over his body, wrote the paper – referring to his doctor’s notes which it said it had seen.

Wevelsiep is now pressing charges against the four police officers of breaking and entering, slander, assault and assault on duty.

Spokesman for the Frankfurt transport authority (VGF) Bernd Conrad told the paper a completely different story. He said Wevelsiep and his fiancé did not have a valid train ticket and were not carrying ID. When the couple called an inspector a Nazi, the inspectors made a routine call to the police for help.

Nancy Faeser of the SPD and Jürgen Frömmich of the Green party told the paper they were awaiting the results of the state prosecutor’s investigation.

If allegations of racism by police were proved true, the pair said they would demand ethnic diversity in the force was improved and that intercultural aspects of police training be extended.