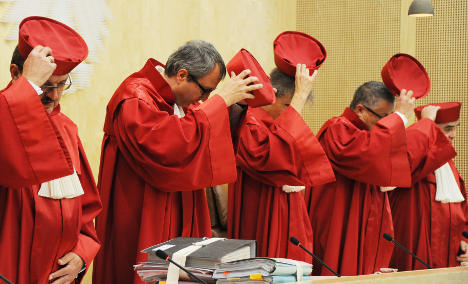 The German system has a duty to uncover all the facts of a case in an inquisitorial rather than adversarial format – the judges are involved with both sets of lawyers in trying to figure out what happened, rather than acting as a referee between two opposing sides.

This concept could be threatened by a 2009 law which regulates confessions bargains, Andreas Voßkuhle, president of the Constitutional Court, said this week. Others fear such deals could pressure suspects into false confessions.

The court’s doubts, discussed in a preliminary negotiation on Wednesday, were sparked by a new study which found that judges were not keeping to the rules set out in the “deal”, but were continuing to make informal bargains with state prosecutors and defence lawyers.

The general rule of thumb is that the accused can have his or her sentence cut by a third if they confess, a reduction that many critics see as a temptation that could pervert justice.

The Constitutional Court is currently deliberating three separate constitutional complaints against verdicts based on such deals. The plaintiffs say their constitutional right not to incriminate themselves had been violated by the bargains.

Justice Minister Sabine Leutheusser-Schnarrenberger, speaking at the Constitutional Court in Karlsruhe, floated possible alterations to the 2009 law in response to the judge’s concerns. She said that the law had been conceived to regulate the “wilderness” of such deals that had existed before. The law had been passed specifically to limit the number of false confessions.

She acknowledged that the results of the study, carried out by Düsseldorf law professor Karsten Altenhain, were “frightening” and must be addressed by lawmakers.

Altenhain questioned around 330 judges, state prosecutors, and defence lawyers in the state of North Rhine-Westphalia as part of his study, which was conducted specifically for the Constitutional Court.

More than half of the defence lawyers described cases where suspects gave confessions that were probably false in order to avoid a heavy sentence. Judges, meanwhile, readily made the deals to shorten complicated trials, the study found.