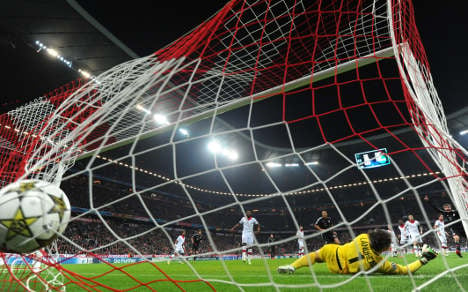 Peru striker Claudio Pizarro needed just a quarter of an hour to wrap up his hat-trick after only 33 minutes as Bayern raced into a 5-0 lead at the Allianz Arena and battered Lille while enjoying more than 60 percent ball possession.

The 34-year-old’s hat-trick was the third fastest in Champions League history as midfielders Bastian Schweinsteiger, Robben and Toni Kroos also got on the scoresheet for Munich while Salomon Kalou scored a second-half consolation.

Munich next travel to Spain to face Valencia on November 20 in their European campaign with all to play for still in the group as Borisov are still in the mix on six points.

“We are on a good run at the moment, but we have to prove ourselves in every game,” said Robben, with Bayern also holding a seven-point lead at the top of the Bundesliga.

“Our first half performance was outstanding and it really was a lot of fun out there.

“We have to keep playing this way. We have such a high quality in this squad, its great to be part of it.”

Goalkeeper Mickael Landreau performed heroics for Lille and although he was beaten six times, he made seven saves to keep the scoreline respectable as Bayern peppered the French goal with 15 attempts on target.

“They scored with almost every attempt on goal,” said Lille captain Rio Mavuba.

“We’re now out of the competition and it hurts. We fought last year to be here tonight and to produce a performance that is not worthy of this club is really disappointing.”

Despite being only Bayern’s third-choice striker behind injured German star Mario Gomez and Croatia’s Mario Mandzukic, who was suffering from flu, Pizarro seized his chance having also scored twice in Bayern’s German Cup win last week.

“Right from the start, we put in a very good performance,” said the Peru star.

“It has been a long time since I have scored three goals, so I am very happy.”

Bayern coach Jupp Heynckes praised his team for some “textbook football”, but warned Munich face a tough home game against third-placed Eintracht Frankfurt on Saturday in the Bundesliga.

“You could see my side was very motivated today, it’s not easy to come to the Champions League from the Bundesliga, but we did well,” he said.

“There was some text book football played, beautiful goals, some from free kicks, with great passages of passing.

“But you have to put today’s game in perspective. We had a deluge of chances in the first-half, but the opponent was not exactly first class. It will be much harder against Frankfurt on Saturday.”