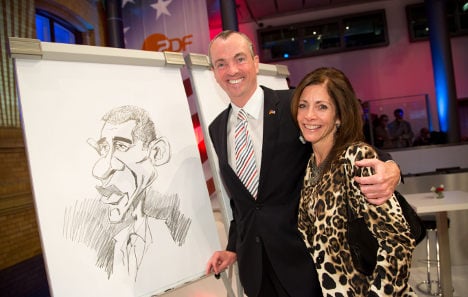 US Ambassador Philip Murphy and his wife Tammy on Tuesday night. Photo: DPA

Ambassador Philip Murphy agreed that the main European issue for the US was the economy, suggesting the old adage that when one side of the Atlantic sneezes, the other catches a cold had never been more apt.

“We care enormously about Germany and how it does,” the ambassador said. “There is enormous linkage between our countries.”

“If you look at US multinational companies, at their recent quarterly reports – where they are soft is where they have exposure to Europe. And the same can be seen with European multinationals.”

“We care a lot about this, and that has nothing to do with the election. We talk every week with Washington about the eurozone.”

He said the number of US experts on the German constitutional court had increased exponentially over the last couple of years as American politicians and business leaders strived to make sense of the eurozone and the efforts being made to save the common currency.

Euro is of crucial importance to US

The discussion panel of political experts agreed that when there was time for Obama to look beyond American shores towards Europe, he would be hoping to see a stabilization of the euro.

William Chandler, professor of political science at the University of California, San Diego said the euro crisis was of crucial importance to the US. “It is important in Washington. We would like to see economic growth take off… that is the interlinking issue; economic recovery. And the European Union is a large part of that, although a great part of the EU is in recession or stagnating.”

Political consultant and commentator John Hulsman said the US would be “begging Germany and France to solve the euro crisis. This is a new kind of foreign policy – we are begging Netanyahu over Iran and we will be begging Germany over the euro.”

America’s chief diplomat in charge of dealing with the Middle East as well as keeping Europeans happy will change as Hillary Clinton is due to step down as Secretary of State. The feeling at the breakfast was broadly that Massachusetts senator and former Democratic candidate John Kerry would be an obvious and sensible choice to replace her.

Dean Moyar, associate professor of philosophy at the Johns Hopkins University, currently at the American Academy in Berlin, said he thought not only would Obama continue to try to “finish clearing up the messes of the Bush presidencies,” he would also try to make progress on some of the festering international problems such as Palestine.

“I don’t know what is going to happen in Syria, but I don’t see any big push towards an aggressive foreign policy.”

Green Party leader Cem Özdemir told The Local there was a danger of again expecting too much from Obama. “We will expect things from Obama which are impossible, like a new international climate change agreement. If we expect too much we will be disappointed.”

“But we speak the same language – those who vote blue [Democrat] in the US vote red [Social Democrat] and Green here in Germany,” he said.

The pressure would be felt through America’s focus over the coming four years on matters that did not directly involve Europe, Özdemir said. This would add to the momentum for the European Union to consolidate its institutions and to act more decisively and in a united fashion, he suggested.

The US would not have the capacity for, nor any particular interest in getting involved in Northern Africa, apart from Egypt, Özdemir suggested. “But for us it is huge, these are our neighbours and it affects our interests.”

“I think President Obama will push us even more to do our job, as Europe. This is good news for us. We want Europe to deepen and now we have our partner pushing us to do our job, because they are no longer going to do it for us like in Bosnia for example.”