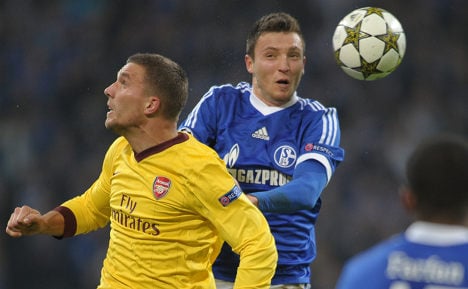 Having lost 2-0 to Schalke at North London’s Emirates Stadium a fortnight ago, Arsenal shot into an early lead as England’s Theo Walcott and France’s Olivier Giroud netted to leave the Royal Blues stunned at the Veltins Arena.

But Holland striker Klaas-Jan Huntelaar pulled one back for Schalke on the stroke of half-time, then Peru forward Jefferson Farfan netted the equaliser midway through the second half to claim a point.

“In the end, we can be happy with the draw,” said Schalke midfielder Lewis Holtby.

“Coming back from a two-goal deficit is a reasonable achievement. It speaks for the morale of our team.”

“I felt overall we played reasonably well, but we dropped off in the second-half,” admitted Arsenal boss Arsene Wenger.

“It’s regrettable that we conceded a goal before the break, then missed a goal with the last chance of the game. They both had a great influence on the result.

“I felt we showed a good response to Saturday’s game (a 2-1 defeat at Manchester United) and the team is getting better.”

Schalke had their chances to win the game with 20 shots on goal, compared to Arsenal’s eight, and the lion’s share of possession.

The draw leaves Schalke top of the table with eight points while Arsenal are just a point behind in second, with Olympiakos third on six points after their 3-1 win over bottom Montpellier, leaving all still to play for in the group.

“It would have been a great victory, but they dominated the second half to be fair and before the game we would have taken a point,” admitted Arsenal goal-scorer Theo Walcott.

But Arsenal brushed off their Premier League defeat at Manchester United on Saturday to take the game by the scruff of the neck with two goals inside the first half an hour.

First, Giroud broke free of the defence, but when Schalke captain Benedikt Höwedes managed to stop him with a good tackle, Walcott was on hand to follow up and tap home for a simple goal on 18 minutes.

The Gunners then kept piling on the pressure and when Giroud’s pass found Lukas Podolski on the left wing, the Germany star fired in a great cross which the Frenchman gratefully headed home on 26 minutes.

Schalke picked the perfect time to pull a goal back with their last chance of the half in the second minute of added time.

After Giroud lost the ball in midfield, Jermaine Jones threaded a pass to Holland star Huntelaar to fire across Mannone and into the bottom far corner.

Huntelaar then wasted a great chance to claim a second five minutes into the second-half when he escaped the defence, but could only fire straight at Mannone.

Schalke finally drew level when Holtby’s pass found Farfan in space down the right wing and Arsenal captain Thomas Vermaelen could only watch as the ball ricocheted off him and into the Gunners’ net on 67 minutes.

The Gunners had two great chances to win it when Walcott first beat Unnerstall but hit the post with 15 minutes left, then fired straight at the goalkeeper with virtually the last shot of the game.

In the next round of matches, Schalke host Olympiakos on November 21, while Arsenal are home to Montpellier the same night.