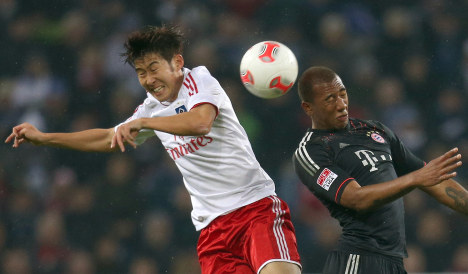 20-year-old Son, who has made 12 international appearances, has been on impressive form this season and is the club’s top-scorer with five goals in ten games. He is thought to be worth €8 million, wrote the Hamburger Morgenpost on Tuesday.

With Son’s contract set to expire in June 2014, Son was evasive last week when asked about his future with the north German club.

“I’m happy in Hamburg,” the star told the paper last week, “but I don’t know whether I will extend [my contract]. That will be up to my adviser.”

And Son’s adviser Thies Bliemeister said they’ll “be listening to everything. It’s an important contract.”

But Fink is very keen to keep his star forward to help build a title-winning team and has dismissed speculation about a transfer as a symptom of Son’s recent success.

“We want to achieve something with Son,” Fink told German Sky Sport News. “I think it would be better for his sporting development if he stayed and played with us. When anyone plays well, there is of course always a bit of transfer speculation about him.

“Ultimately, Son must know that we want to build something here and we have kept hold of players who want to also achieve something,” he added.

Hamburg are at Freiburg on Saturday and are currently ninth in the league having lost 3-0 at home to Bundesliga leaders Bayern Munich last weekend.