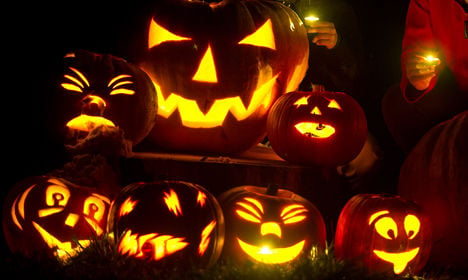 In Bonn, two drunken 17-year-olds who covered more than 30 cars with shaving foam, egg and tomato ketchup are likely to face hefty bills from the vehicles’ owners. A bus driver in nearby Remscheid was forced to pull over after being pelted with eggs.

Up in the north east of the country, police were called to the scene of a robbery.

A gang of opportunist thieves in Rostock forced an 8-year-old boy and a 13-year-old girl to hand over their haul from treat-or-treating. They threatened the girl with what appeared to be a gun.

A separate group took a bag filled with treats from a pair of 12-year-olds in neighbouring Schwerin.

In fact, children wanting to go trick-or-treating Rostock should exercise a little caution – one elderly lady appeared to be so freaked out by the tiny monsters at her door that she hit two young girls in the face after rang her doorbell.

In the southern city of Trier, one of the scarier sights on Wednesday night was a 16-year-old boy being dragged through the streets by police, who said that he was very drunk and had been throwing things at the building of a security firm.

The prize for the most police calls goes to the Rhein-Erft area near Cologne, where officers fielded 81 different cries for help – mostly complaints of loud music from parties. In Mannheim police received 50 phone calls and in the Swabia area of Bavaria there were 40.

Officers in Esslingen near Stuttgart did not have an easy night either. They confiscated hundreds of eggs, 200 firecrackers and even homemade smoke-bombs. A group of six boys saw their stash of 200 eggs confiscated by the constabulary.