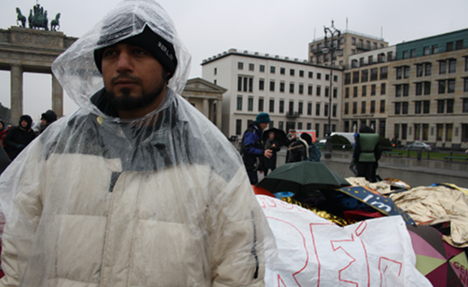 Berlin was cold early on Tuesday morning – not as cold as a day before when it was below zero, but this morning it was wet too, forcing commuters and tourists under umbrellas.

The refugees at the Brandenburg Gate also have umbrellas – but they are on the ground, donated by Berliners and grouped together to create an ad-hoc tent under which 20 people have been living since last Wednesday.

Sleeping on the bare stones of Pariser Platz, as the police arrive in the early hours each night and confiscate sleeping bags, camping mats and even cardboard used to keep out the chill of the pavement.

“The police have been doing this for the past few nights,” a 29-year-old Iranian man says. “We have asked them why they come in and wake us up at 2 am but they say nothing and make us give them our things.”

He, like many of the other anorak-clad refugees shivering in the chill drizzle, walked to the capital from Bavaria to protest how the German government treats asylum seekers.

Fifteen of the group had embarked on a hunger strike, but stopped after a 23-year-old was hospitalised on Monday.

Pitching a tent on Pariser Platz would not be tolerated, a police spokeswoman told The Local. Making an exception for this group would set a precedent for others, she added. And on Tuesday morning there were about as many police officers as protestors in front of the gate.

Caught in a staring match with a line of German activists who are there to support the refugees, the officers move forward to usher back a woman who has stepped into the empty road with a placard.

Around 100 people left their refugee accommodation in Bavaria at the end of September and marched 600 kilometres north to the capital to protest against deportation and the living conditions that asylum seekers face in Germany.

In Berlin, they set up a large camp in the Kreuzberg area of the city and last Wednesday a number moved to the Brandenburg Gate. Dedicated activists from the city have stuck around to keep the group topped up with warm food and drinks but the music and bustle of the original camp appears to have remained in Kreuzberg.

“We will be staying here until the government opens its ears,” the Iranian man said, declining to be identified. “I can’t go back to Iran, I faced political and religious persecution there,” he added in perfect English.

“And although I was in a real prison there, in Germany I feel like I am in an invisible prison,” referring to the refugee hostel-style accommodation they are forced to live in, often miles from anywhere.

They are also banned from working for a year and are not offered German lessons, leaving them in an often penniless limbo. Without permission to work and limited opportunities to learn the language, stuck in a hostel miles from anywhere, integrating is almost impossible, he said.

“Of course I want to learn German; I would also love to go back to university.” He graduated in Iranian literature, but would like to retrain in something more useful.

He turned 29 on Sunday, sitting on the icy flagstones in front of the Brandenburg Gate, his fellow refugees and supporters singing in Persian and German. “The experience was paradoxical for me,” he said. Although happy in that moment, he said he was acutely aware of the continuing struggles at home and now in Germany, that had dominated his life.

“Until the government opens its ears we will be here,” he said. But with the winter will soon bring snow and even colder temperatures, while Berlin politicians are pushing for the refugees to move into emergency accommodation.

“So far we are fine,” the Iranian man said. “We have all experienced much worse in our lives than a few cold nights.” Yet at some point they may well be pushed aside to somewhere warmer – and out of sight.