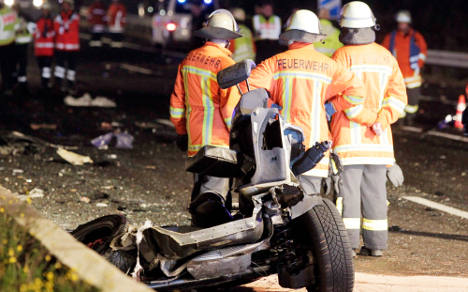 The 47-year-old man, his 46-year-old wife and their eight-year-old twin daughters, were killed instantly in the collision, which was so powerful it smashed their car into two.

They had got out of their car after it and another had collided on the A5 motorway. That first crash seems to have left them and the driver of the other car unhurt – but as they were standing on the road waiting for help, another car hit them.

Police were on Monday searching for a lorry driver who appeared briefly on the scene. It remains unclear whether he was involved in the accident or arrived shortly afterwards, and police are appealing for any witnesses to come forward.

The autobahn was completely closed off for several hours in the early hours of Monday.