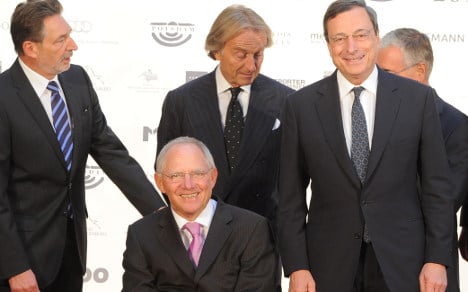 The EU should have the power to police and interfere in member states’ national budgets, Mario Draghi told Der Spiegel magazine in an interview due to be published on Monday, saying he “completely supported” the suggestion by German Finance Minister Wolfgang Schäuble to give more autonomy to the EU’s economic and monetary affairs commissioner.

“I am certain, if we want to restore confidence in the eurozone, countries will have to transfer part of their sovereignty to the European level,” Draghi told the magazine, demanding a more concerted push for European integration.

“Several governments have not yet understood that they lost their national sovereignty long ago. Because they ran up huge debts in the past, they are now dependent on the goodwill of the financial markets,” Draghi said.

Since the outbreak of the eurozone debt crisis three years ago, the European Union has taken unprecedented measures, including creating a fiscal treaty between them, setting up a huge joint bailout pot and moving towards a banking union next year.

“Governments have taken steps that would have been unthinkable a year ago. That is progress but it is not enough,” Draghi said.

Creating new financial rules in the EU will not be enough to save the currency, said the central bank chief, they must also be rigorously enforced.

Draghi also reiterated his defence of the ECB’s disputed programme of buying the bonds of debt-wracked countries to drive down their borrowing, unpopular with Germans who fear it will cause inflation.

“My family once lost a large part of its savings through inflation. So you can be sure that I champion price stability not just for professional reasons but also for personal reasons,” said the Italian.

EU leaders will gather in Brussels on December 13 and 14 to thrash out a framework for the future running of the 27-nation Union on the basis of a report being drawn up by Draghi and three other senior EU politicians.