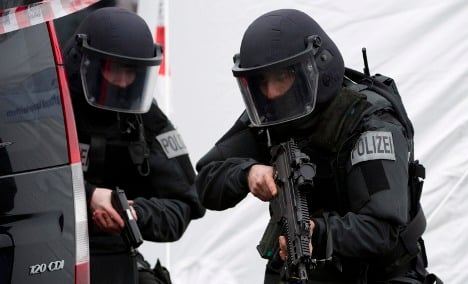 Three law-abiding tenants at a flat in Rollhausen, near Göttingen, Lower Saxony thought they were being burgled when a SWAT police unit forced their way into their flat in the early morning hours of Friday morning.

The masked officers burst into the couple’s bedroom and pointed their guns at them, Der Spiegel magazine reported on Saturday.

“They tied me up with cable binders,” a male resident told NDR broadcaster, “I cried out in pain.”

Only then did the unit – who had been searching for a 45-year old man who had earlier threatened another man with a weapon – ask for the startled tenant’s name.

When it quickly became clear they had made an error, the policemen apologized to the couple and left. Later it emerged the unit had got the wrong floor of the block of flats, with police explaining there had been a mix up in communication.

“The SWAT unit got the wrong flat. We were thwarted by an error in internal communication. We have already apologized,” Otto Moneke, head of the police department in Duderstadt told NDR.

Although police will repair damage caused when they broke in, a woman and her 19-year-old daughter – both of whom are now in therapy – say they were traumatized by the incident and have contracted a lawyer to explore their case for further compensation from the authorities.