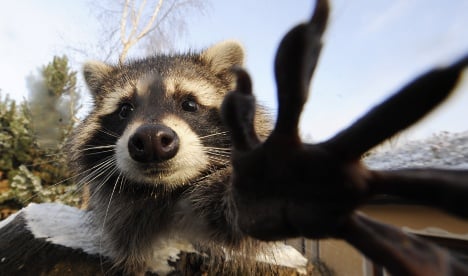 Sociable, fearless, adaptable and with a sweet tooth: hordes of rascal raccoons are entering the German suburbs in search of food, conservationists said on Saturday.

Introduced to Germany in Hesse in the 1930s, the non-native animal rapidly settled in, made itself at home and is now regularly spotted up and down the country.

“We’ll have to reckon with more raccoons in towns in future,” said Magnus Wessel, head of the conservation department at Friends of the Earth Germany (BUND).

Believed to seek out human dwellings both for safety from predators and for the abundant food, the omnivores have even been known to enter houses in search of a quick snack.

One animal, no longer content to be hand fed at the front door, burst into a living room in Trippstadt near Kaiserslautern. “The raccoon came through the cat flap and ate the crisps on the living room table,” said Günther Klein of the Rhineland-Palatinate hunting association.

In a separate incident, a couple in Spessart, Hesse, got a nasty shock when they came home from holiday to find a raccoon relaxing on their sofa – surrounded by carnage.

“He had [ripped up] all the upholstery and laid waste to the house,” said Klaus Röther. The animal is thought to have come down the chimney, he added.

Raccoons have also been raiding German cornfields and orchards, according to the report. Famous for their sweet tooth, they are particularly partial to plums, apples and cherries.

Some hunters even put down chocolates to attract and catch the pests, said Bernd Moeller, of the Brandenburg hunting association.

But although hunters are fighting to keep populations under control, they admit the raccoons are here for good.

“The raccoon has established itself in Germany, it has to be accepted,” said Daniel Hoffmann of the German Hunting Federation (DJV).