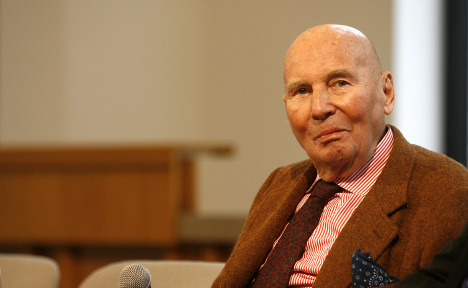 “With the death of Hans Werner Henze we have lost one of the most versatile, important and influential composers of our time,” Schott said in a statement on its website, saying the composer died in the eastern city of Dresden.

Born in Gütersloh on July 1, 1926, Henze’s prolific output covered a wide range of works, including more than 40 operas and pieces for the stage, 10 symphonies, concertos, chamber music, oratorios and song.

“What is unique about his work is the union of timeless beauty with contemporary commitment,” Schott said.

Henze was openly gay and made his home in Italy, in the Albani hills outside Rome with his partner of more than five decades, Fausto Moroni, whom he met in 1964, but who died in 2007.

It was in the classical landscape of Italy “that he found his own harmonious balance of art and life — throwing himself into his many practical projects, entertaining generously with his companion Fausto Moroni, then retreating into his study and his scores,” the statement said.

Henze, perhaps best known for his symphonies and music theatre, enjoyed a unique collaboration with the Austrian poet Ingeborg Bachmann, who wrote the libretti for his operas “The Prince of Homburg” (1958-59), “The Young Lord” (1964), “Elegy for Young Lovers” (1959-61)and “The Bassarids” (1964-65), which Schott described as “milestones in his compositional output.”

Henze was the eldest of six children of a conservative school teacher. His early interest in arts and music, his homosexuality and non-confirmist politics was the source of conflict with his father, a member of the Nazi

He was nevertheless called up to the army in 1944, where he trained as a radio officer. But he was soon captured by the British and held in a prisoner of war camp for the remainder of the war.

It was Henze’s experiences during this time that left him with a passionate and lifelong hatred of war and fascism and also left their mark on his artistic output, notably in another stage work, “We come to the River”

“With the unshakable courage of his convictions, but also with his joie de vivre, his love of beautiful things and of nature, Henze’s restless spirit reveals to us a man who never lost sight of his artistic aspirations, despite

“To him, composing was both an ethical commitment and personal expression. He had to write, with relentless self-discipline, and when times were hard it threw him the anchor he needed and saved him from his darkest moments.”