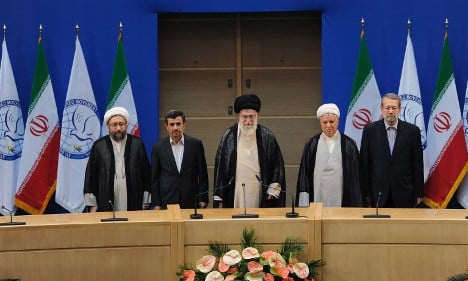 The politicians, members of the German-Iranian parliamentary group, claim they will use the visit to address human rights violations, but critics say this is a cover to strengthen trade links between the two countries.

“For us it is important to make our position very clear once again, especially in regard to the striking human rights abuses in Iran,” head of the delegation Bijan Djir-Sarai, an Iranian-born member of the German pro-business Free Democratic Party (FDP), told Associated Press news agency on Tuesday.

Djir-Sarai will be accompanied by Thomas Feist from German Chancellor Angela Merkel’s Christian Democrats (CDU), Angelika Graf of the Social Democrats (SPD) and a five-member delegation from the European Parliament.

The German politicians have outraged Jewish groups by agreeing to meet the head of the Iranian human-rights council Mohammad Javad Larijani, a known holocaust denier who has called for Israel’s destruction, according to a report by Israel’s Jerusalem Post on Wednesday.

Head of the Central Council of Jews in Germany Dieter Graumann described the move as “a brazen piece of being on the wrong political and moral way, that of all things to visit a regime that continues to build its nuclear programme and threatens the destruction of Israel and continues to deny the Holocaust,” wrote the Israeli newspaper.

One critic, Wahied Wahdat-Hagh, described by the paper as an expert on German-Iranian relations, said the Germans – who are also due to meet with the German-Iranian chamber of commerce – were using statements on human rights as a cover for advancing economic ties between the two countries.

The unusual diplomatic move, which the European Parliament has said is designed to “build bridges,” has also caused a stir in the US, despite receiving little coverage by the German press.

Earlier this month US Senators Jeanne Shaheen and Ben Cardin sent a letter to Martin Schulz, President of the European Parliament, urging him to reconsider the trip “given Iran’s continued human-rights offenses and failure to suspend its nuclear programme,” according to the report.

“The decision to go ahead is unfortunate,” Cardin told the Jerusalem Post.