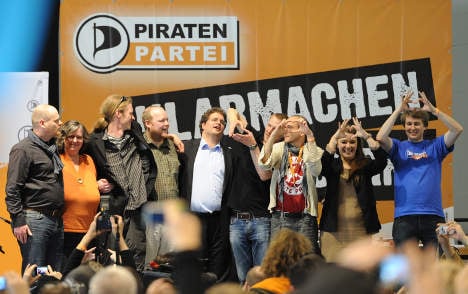 Both Julia Schramm and Matthias Schrade announced Friday they would be leaving their posts in the party leadership.

Schramm came under fire when her book “Click me. Confessions of an Internet Exhibitionist” was released in September. Not only was she slammed in the German press, but denounced by party colleagues as “arrogant,” “dumb” and a “commerce slut.”

She stood accused of not only accepting a reported €100,000 advance payment for a book Der Spiegel magazine described as “a disaster”, but – far worse in her party’s eyes – of giving her publishing house permission to block access to an unauthorised online free copy.

Schamm’s critics said her actions have directly undermined the Pirate’s anti-copyright platform, indignantly pointing out that Schramm herself has in the past demanded a revision of existing copyright law.

The latest developments seem to have prompted the Pirates into open mutiny.

Schrade explained his surprise resignation on Friday with a direct attack on chief party whip Johannes Ponader, who Schrade said in his blog “paralysed” the work of the party leadership and that he “could no longer take it.”

Ponader has also faced calls for him to walk the plank, but has denied rumours he will do so. His critics accused him of overplaying his time living on Harz IV unemployment benefits in interviews with the media.

Yet all the party infighting may end up sinking the Pirates’ ship. A recent poll for the ZDF TV channel shows the party now below the crucial 5 percent hurdle needed to enter the Bundestag lower house of parliament in elections next year.

In an attempt to make up lost ground on Thursday, Stefan Körner, head of the Bavarian Pirate Party called publicly for the party leadership to be replaced.

“A leadership which continues to include Johannes Ponader and Julia Schramm will cause us long term damage,” he told Der Spiegel.