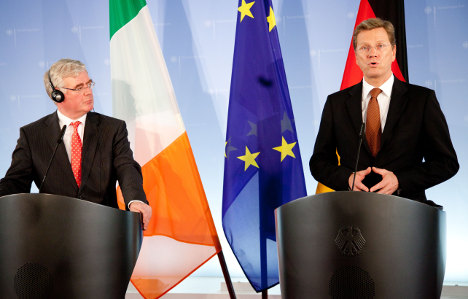 Speaking after talks in Berlin on Friday, Gilmore said: “We are determined to be the first country to successfully exit from such a programme and we are on our way to achieving that goal.”

Ireland’s EU-IMF bailout package worth 85 billion euros ($107 billion) is due to expire at the end of next year and the country hopes to regain full access to the financial markets at that point.

Both ministers also reaffirmed comments at the weekend made by their respective leaders that Ireland should be considered a special case when applying for banking aid from the eurozone’s new bailout fund, the European Stability Mechanism (ESM).

“Our economy returned to growth last year but we are carrying a very heavy burden of bank debt because our taxpayers were required to shoulder the full cost of the bank bailout,” said Gilmore, who is also deputy prime minister.

“In view of these unique circumstances, we appreciate the commitment of Germany and our other EU partners to examine Ireland’s special situation,” he added.

For his part, German Foreign Minister Guido Westerwelle said that Ireland was “an excellent example that you can make it with discipline, with hard work and that you can work your way out of this debt crisis.”

“We are full of respect for the Irish efforts. We are grateful for your efforts and your pro-European views and we admire the success story you are writing,” added the minister.

Comments by German Chancellor Angela Merkel at a summit last week of EU leaders that countries could not benefit retroactively from bank recapitalisation from the ESM spooked many in Ireland.

To assuage these fears, Dublin and Berlin issued a joint statement over the weekend insisting that the country’s banks were a “specific case,” a position later echoed by France.

Merkel’s spokesman said she would meet Irish Prime Minister Enda Kenny on Thursday in Berlin to discuss the eurozone crisis.

Dublin argues it should still benefit from bank recapitalisation funds because, unlike in the case of Greece, private investors were not forced to take a hit on their bond holdings.

Ireland had to seek an EU-IMF bailout in late 2010 after government efforts to keep its banking sector afloat left it virtually bankrupt, forcing it to seek outside help in return for tough and unpopular austerity measures.

Direct bank recapitalisation is meant to prevent banking crises from turning into national debt crises when governments are forced to bail out their financial sectors.

Westerwelle declined to comment on earlier remarks by a senior member of Merkel’s conservative CDU party, Norbert Barthle, who said an application to the ESM would entail a new bailout programme and new strings attached.