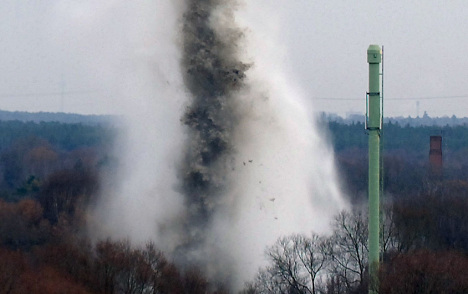 Under current rules, the federal government will only pay to remove the WWII weapons if they were German-made – otherwise the local authorities have to stump up, the Lausitzer Rundschau newspaper reported on Friday.

Dietmar Woidke, interior minister for the eastern state of Brandenburg, where tens of thousands of allied bombs fell during the last years of the war, told a meeting of the German states in Berlin on Thursday that current rules are unfair and that the federal government is “shirking its national responsibility.”

Local states say they are overwhelmed by the scale of the task. Brandenburg alone has spent around €318 million on removing allied bombs since 1991, compared with just €108 million shelled out by the federal government over the same period, wrote the paper.

“360,000 hectares, so considerably more than ten percent of the area of the state of Brandenburg are contaminated with munitions,” Woidke told the meeting.

Around 500 tonnes of weapons are recovered in Brandenburg every year, the paper wrote, with unexploded devices continuing to pose a serious threat to the population.

“In Berlin and Hamburg alone there are still 3,000 unexploded bombs lying in the ground,” Wolfgang Spyra, an expert on contaminated sites, told the paper.

A big example is Oranienburg to the north of Berlin, which was devastated by air attacks in 1944 and 1945 by allied bombers aiming for a large munitions factory in the town centre.

At least 20,000 of the tens of thousands of allied bombs dropped on the town and surrounding area were fitted with long delay detonators and could go off without warning – five have exploded since the end of WWII, according to the report.

“The people [are] expected to live in constant uncertainty and fear and not know whether there are still bombs there which might explode some time,” said Oranienburg deputy mayor Kerstin Kausche.

“The lasting danger from allied weapons is the result of a war waged by Germany and not the state of Brandenburg,” Woidke told Thursday’s meeting, adding that he could see no good reason why the origin of the bombs should determine whether the federal government financed their removal.

The new initiative is Brandenburg’s third attempt to get the federal government to foot the bill for disposing of all WWII debris. This time it may well succeed, as all the states have indicated they will give it their backing.