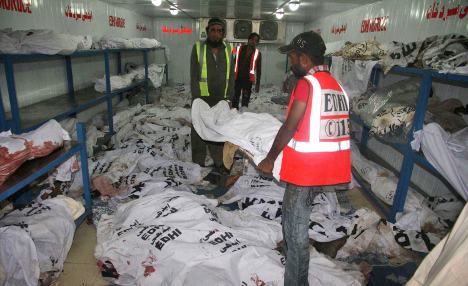 At least 289 workers were killed and 110 more injured as fire swept through the Ali Enterprises factory in Karachi, which made jeans for Western shops, including large contracts with Kik.

Der Spiegel magazine reported on Tuesday that Kik had agreed to pay a total of $500,000 compensation to be shared between the relatives of those who died. This worked out as less than €1,500 for each death, a sum which drew heavy criticism from Pakistani trades unions.

“We did not agree with the compensation they had announced. We warned them that we would seek for international justice if they did not share responsibility and deservedly compensated the families,” Mansoor told AFP.

Mansoor said NTUF was in talks to secure an even bigger payout for the workers.

Kik agreed to compensate the victims and their families only after activists presented them with evidence that most of the factory’s output was destined for its Okey brand, Mansoor said.

“We saw the labels on the merchandise, checked invoices and interviewed the workers to know that at least 90 percent of the garments the Ali Enterprises was producing, was the Okey brand for Kik,” he said.

“We contacted the company and asked for the compensation. Initially, they declined to accept the fact, but they finally gave in to the concrete evidence we had.”

The Pakistani government has paid more than 100 family members 700,000 rupees ($7,000), but many families say they are still waiting for cheques, which have been held up by governmental red-tape.

Of the 110 workers who were injured, dozens suffered disabling injuries. About 2,000 other workers have lost their livelihood.

“Life has become hell since that fire,” said Mohammad Khalid, 29, who worked at the factory with his elder brother Majid. Majid died and Mohammad lost his left arm in the inferno.

“I have to take care of my brother’s family as well, but cannot find a job because of my disability,” he said.

His family have not yet received compensation from the government and he sees the German company’s money as inadequate to offer a better life for the two families.

“We have lost both male breadwinners. This compensation will not help for long. Our women and children will have to work hard to feed all of us,” he said.

Two of the three factory owners are facing murder charges. Their application for bail last week was rejected and they were sent to jail on remand.