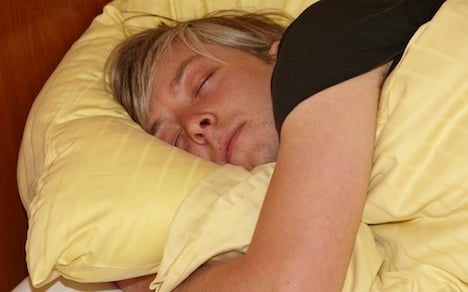 After surveying almost 9,000 people aged between 16 and 25, scientists found that they slept for an average of six hours, 42 minutes on a weeknight. This could cause psychological problems, headaches, and digestive problems, said the Frankfurter Rundschau daily.

More than half said they did not feel rested during the day and some 70 percent told researchers that they would like to sleep more.

Researchers blamed television and the internet as two of the reasons why younger people go to bed later. Biology also came into play, as a young brain goes through changes that affect the release of the sleep hormone melatonin.

“Getting enough sleep during puberty is very important for one’s health,” study director Manfred Betz told the paper. By sleeping an average of six-and-a-half hours during the week, and nine on the weekends, they are “sleeping less than older adults, even though in their youth they need more sleep.”

Changing school timetables so that classes starting at around 9 am for students between the ages of 16 and 20 would make sense, said Betz. He also championed informing young people better about the negative health affects of too little sleep.

The study was conducted by the Institutes for Health Promotion and Research (IGFF) in Dillenburg and the Medical Sleep Centre in Marburg.