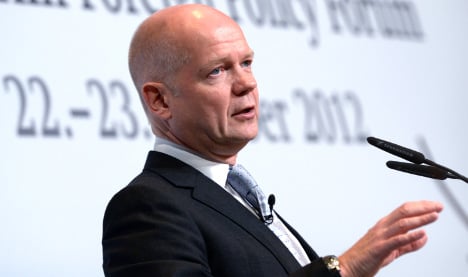 He said the push for ever-greater coordination in areas like the banking sector and national budgets to fight the euro crisis risked in fact driving a wedge through the EU – creating mistrust particularly in his own Conservative Party, currently in an ill-tempered coalition with the British Liberal Democrats.

“The coalition government is committed to Britain playing a leading role in the EU but I must also be frank: public disillusionment with the EU in our country is the deepest it has ever been,” Hague said.

“People feel that in too many ways the EU is something that is done to them, not something over which they have a say… People feel that the EU is a one-way process, a great machine that sucks up decision-making from national parliaments to the European level until everything is decided at that level.”

He added: “These points may be felt most acutely in Britain but they’re not felt only in Britain.”

As Europe faces a growing gulf between the 17 countries of the eurozone which have the euro currency, and the remaining 10 EU member states, Germany Foreign Minister Guido Westerwelle insisted all 27, including Britain, should encourage a sustainable end to the euro crisis.

“All Europeans, and not just those in the eurozone, share an interest in a strong Europe and a healthy euro,” Westerwelle said.

He said Berlin’s drive for a fiscal union imposing budgetary discipline, which Britain has refused to join, and EU plans for a banking union were part of a crucial integration process that would be beneficial for all.

Tensions between Britain and Germany over Berlin’s push for greater European policy coordination have come to a head in recent weeks.

A report in Der Spiegel magazine this month said that Chancellor Angela Merkel in private compared British Prime Minister David Cameron and his cabinet members to the grumpy Muppets Statler and Waldorf, moaning and criticising from sidelines.

The German government has declined to comment on the report and on Monday joined Britain in denying that Merkel would have a November EU summit on the bloc’s seven-year budget scrapped if Britain threatened to veto a deal.

Germany is calling for a one-percent spending increase, a proposal Hague again dismissed as “massive” at a time when Britain is implementing swingeing cuts to its own public budget.

Finnish Foreign Minister Alexander Stubb, who also took part in the debate and whose country has frequently sided with Germany in its austerity drive to beat the euro crisis, voiced concern about growing British euroscepticism.

“I am really worried about the UK and the way it is going,” he said.

“I think if the UK is marginalised or marginalises itself… it will be bad for Europe and bad for Britain.”

Hague said the EU needed to solve three problems to maintain its relevance: structuring the bloc so countries could pursue different levels of integration, dealing with a lack of democratic legitimacy and accountability and getting the right balance between what the EU does and does not do.

In a later debate, Westerwelle appealed to London not to drift away from Europe.

“We want to have Great Britain on board,” he said. “We think Great Britain is not an island in the middle of the Atlantic, it is a European country, there is no doubt for us.”