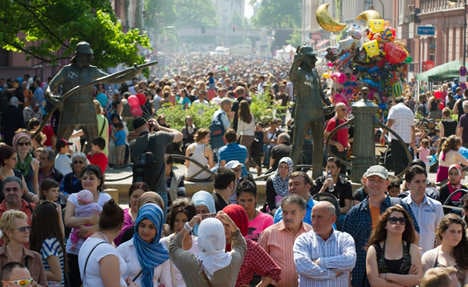 People had to be more aware of their own values in order to be tolerant of others, he said, in his first official speech as president in the capital city.

After walking through the iconic Brandenburg gate with Berlin Mayor, Klaus Wowereit, Gauck addressed hundreds of onlookers in the City Hall, near Alexanderplatz.

He suggested the less certain a person was of their own values, the more prejudices and resentment they were likely to develop. And he indirectly referred to the conflict which arises when support for the rights of minorities to self-expression is confronted with that expression being opposed to democratic values.

Germany had to be careful not to mistake tolerance for indifference – and that there could be no indulgence of ideologies which rejected democratic society, he said.

A “culture of positive discourse” was needed to prevent the friction which automatically arose from a mixed society, from turning to aggression.

But he stressed that Berliners should not be scared of variety, almost reviving the concept of multiculturalism, famously declared to have failed, by Chancellor Angela Merkel in 2010.

Referring to the fatal Alexanderplatz attack, Gauck called for people to show social resolve and not to look away. The murder had left him “totally outraged”, he said.

Wowereit welcomed Gauck onto the stage, but not before adding a few words of his own. Berlin, he said, historically had flourished when at its most open and tolerant.

The president was also scheduled to visit to a mosque in the working-class Neukölln district, as well as a visit to a centre for young businesses and meetings with youths from the city.