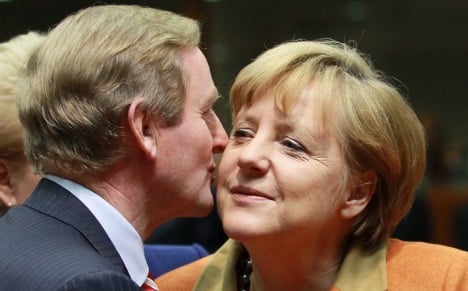 Steffen Seibert told reporters at a regular briefing that Chancellor Angela Merkel and Irish Prime Minister Enda Kenny had discussed on Sunday ways to decouple the problems of banks in Ireland from the country’s sovereign debt.

“They spoke about the special circumstances of Ireland’s banks and the sovereign debt problem,” he said.

“The Eurogroup is to look at Ireland’s situation in the context of improving the sustainability of the Irish [debt] programme,” referring to eurozone finance ministers.

Seibert noted that “no country is like another” and that Ireland had recapitalised its banks with its taxpayers’ money – a factor to be considered while trying to break the vicious circle in which stricken banks sink an economy and force a bailout.

The Irish government issued a statement after Kenny and Merkel held telephone talks late on Sunday on what it called “the unique circumstances behind Ireland’s banking and sovereign debt crisis, and Ireland’s plans for a full return to the markets”.

“In this regard they reaffirmed the commitment from June 29th to task the Eurogroup to examine the situation of the Irish financial sector with a view to further improving the sustainability of the well performing adjustment programme,” Dublin said.

“They recognise in this context, that Ireland is a special case, and that the Eurogroup will take that into account.”

Dublin had hailed an accord at the EU summit in June as offering a way of getting billions in bank bad debt off its books, thereby strengthening the public finances at a stroke and allowing some leeway to stimulate the economy.

However Merkel said after another EU summit last week that ailing Spanish banks could not benefit retroactively from a direct bank recapitalisation by the eurozone’s bailout fund, comments that spooked many in Ireland.

Ireland had to seek an EU-IMF bailout in late 2010 after government efforts to keep its banking sector afloat left it virtually bankrupt, forcing it to seek outside help in return for tough and unpopular austerity measures.