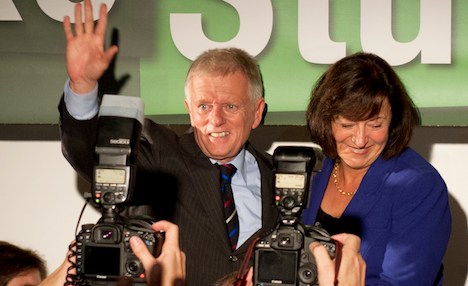 Kuhn beat his primary opponent, independent candidate Sebastian Turner, by winning 52.9 percent of the vote. Turner, who had the backing of Angela Merkel’s conservative Christian Democratic Union, came away with 45.3 percent of the vote Sunday.

He criticized the campaign tactics of his opponent. “One doesn’t become mayor through ‘negative campaigning,’ but through positive debate,” he said.

Turner, a 46-year-old Stuttgart businessman, said Kuhn had won a clear mandate. He defended his campaign after the loss. “I openly addressed the Greens’ positions and those of Fritz Kuhn, but always with specific quotes and without personal attacks,” he said.

Turner said he would consult with his wife before deciding whether or not he would remain politically active.

Baden-Württemberg’s state premier, fellow member of the Green Party Winfried Kretschmann, congratulated Kuhn after the win. “The state parliament will work together well with the mayor and the city of Stuttgart,” he said.

Green Party Bundestag parliamentary co-chairs Renate Künast and Jürgen Trittin said it was “a great day for Stuttgart and for Baden-Württemberg.”

The state parliamentary chair Edith Sitzmann said the results of the election showed “a great mark of confidence in the policies of the Greens and a clear rejection of unfair campaigning.” She said that Kuhn’s election was further proof that the Greens ideas had long become part of the mainstream.

Volker Kauder, chairman of the CDU parliamentary party told the network ARD, that only time would tell if Sunday was a good day for Baden-Württemberg.

The CDU supports the controversial railway project “Stuttgart 21,” which received backing from the regional population in a state referendum last year. Kuhn has been openly critical of the project in the past, but during the election campaign he promised to accept the popular mandate and to lead the project in a discerning way, in order to make it better.