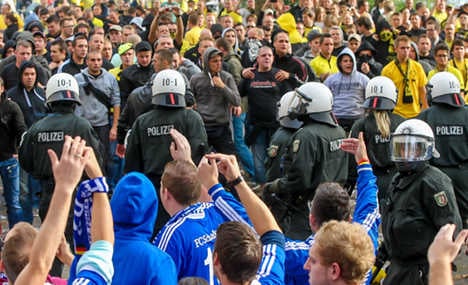 Schalke claimed a rare victory which was over-shadowed by violent clashes in Dortmund between fans and police, with eight officers injured.

A total of 180 football fans were arrested, 163 from Schalke and 17 from Dortmund, with police seizing fireworks, pepper spray, reinforced gloves and other weapons. Fans also tore up paving stones to throw at officers and opposition fans.

The organised violence is of obvious concern ahead of Wednesday’s Champions League group game between Real Madrid and the German champions in Dortmund.

“The level of violence was much more severe than in previous years,” said Manfred Radecke from the Dortmund police. He added that the German Football Federation (DFB) would almost certainly be investigating the rioting.

“We have to plan for riots and deploy the correct number of officers and put a plan in place.

“But we hadn’t expected that things would degenerate to such an extent and that we would need to use a water cannon and tear gas.”

Police used tear gas to break up the melee when a 600-strong group of Schalke fans was attacked by masked Dortmund supporters on their way to the Signal Iduna Park stadium.

A water cannon was also used to prevent Schalke fans tearing down a fence near the stadium, while a restaurant near the ground was ransacked with Dortmund fans using the broken furnishings as weapons.

“We don’t regard these people as football fans,” added Radecke. “They use every opportunity to play out their aggression and if police have to step in, they are happy to target them as well.”

An under-17 match between Schalke and Dortmund took place on Sunday with a large increase in police numbers.