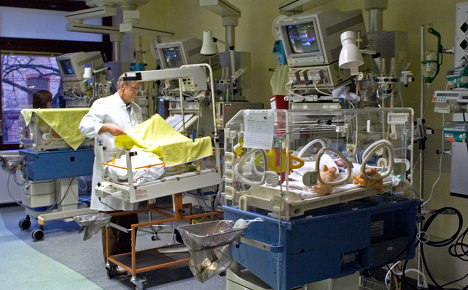 The newborn boy, who was born with a heart defect, is thought to have died from blood poisoning. He had undergone an operation in the Berlin Charité hospital – Germany’s largest teaching hospital – five days before his death, head of neonatal care Christoph Bührer confirmed.

He and 15 other babies are thought to have contracted the Serratia bacteria. Seven of them babies are being treated while the others who were found to have the bacteria were not deemed to be in danger. It is not yet clear where the babies picked up the infection.

The hospital has put two of its five specialised neonatal wards on lock-down, meaning no more babies can be admitted.

“We are looking for the cause of the problem here [in the Charité], not in others [hospitals],” said Bührer. The bacteria were not found when the baby was examined before his heart operation pointing to a source of infection at the Charité rather than the referring clinic.

Medical director at the Charité, Ulrich Frei added that the babies would not be moved elsewhere.

Serratia bacteria come from the intestines, but also survive outside of the human body. An infection is particularly dangerous for newborns and very ill babies. Frei stressed that “the environment is full of germs,” and that staff at the Charité were zealous on hygiene.

All creams, solutions and baby soap have been inspected and thrown out from the wards. Staff were currently moving all the babies in one ward so the others could be disinfected, Frei said.

But the health spokesman for the city state’s Green party has called for stricter hygiene management in Berlin hospitals. Money should not come into the equation, said Heiko Thomas.

The case is similar, but less severe, than a different bacterial infection in Bremen last year. Three babies died there and the state prosecutor launched an investigation against the now former head neonatal doctor for negligent manslaughter.