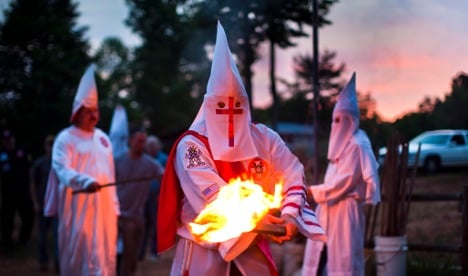 An employee of the domestic security service warned the head of the Stuttgart KKK chapter his telephone calls were being monitored, the Stuttgarter Nachrichten newspaper said on Wednesday.

This was confirmed by sources from that service – the Office for the Protection of the Constitution (BfV).

The state Interior Minister Reinhold Gall was expected to address a closed session of the State Committee on Internal Affairs on the issue on Wednesday.

This came just a week after a report by the Frankfurter Rundschau newspaper that not two, but three members of the Baden-Württemberg police force were suspected of being linked with the European White Knights of the Burning Cross at the height of its German operations in 2001.

This is the name adopted by the local chapter of the international racist and highly anti-Semitic secret Ku Klux Klan organisation.

The alleged links between the police and the KKK resulted from the investigation into the death of Michèle Kiesewetter, a 22-year-old police officer shot dead while on duty in Heilbronn near Stuttgart in 2007. Her murder is believed to be the work of the neo-Nazi terrorist gang which called itself the National Socialist Underground (NSU) and is thought to have also killed nine businessmen of foreign extraction.

A top neo-Nazi police informant had told the BfV back in 2002 that Kiesewetter’s team leader – suspected of having led her murderers to her – had been a member of the KKK in 2001, the Frankfurter Rundschau reported this August.

Last week the same paper revealed that the source, known as ‘Corelli’, had told the Interior Ministry in Stuttgart back in 2002 that another policewoman in the Stuttgart narcotics department also had close KKK links.

All three police officers are still in their jobs and have received little or no punishment beyond a mild reprimand, with the Baden-Württemberg Interior Ministry claiming they had committed no crimes.

A Ministry investigation released this August claimed that ‘Corelli’s’ information was “not verifiable.”

“On the basis of the investigation results, the deletion deadlines and the ban on evaluation laid down by disciplinary law, further measures against the policemen are not possible,” said Baden-Württemberg Interior Minister Reinhold Gall told Tuesday’s Die Zeit newspaper.

In September the informant ‘Corelli’ was outed in the German press as Thomas R., a leading neo-Nazi, and one of the co-founders of the German KKK when it first appeared online in 1998.

He is also thought to be a member of the international neo-Nazi Blood & Honour network, which is known to have supported the NSU gang with money and weapons, as well as having personal contact with NSU member Uwe Mundlos.