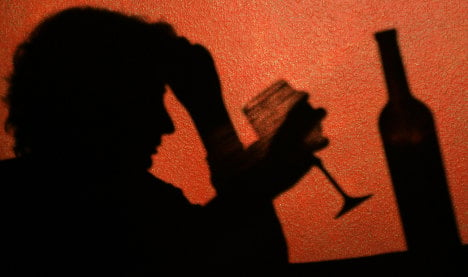 “None of the deceased alcoholics [we studied] reached the average age of 82 for women and 77 for men,” said Ulrich John, an epidemiologist at the University of Greifswald who led the study.

The mean age at death for the alcohol-dependent group in the study was 60 for women and 58 for men.

International guidelines say women should limit their alcohol consumption to 12 grams per day – the amount in an eighth of a litre or a glass of wine, or a quarter of a litre of beer. The daily limit for men is twice as much.

“We were surprised that alcohol dependency appeared to be an especially big contributor to a shorter life compared to smoking,” he added. This would seem to be largely because alcohol kills earlier than tobacco.

John said smokers were often well past the age of 60 by the time they died from cancers related to tobacco use.

The study, conducted by scientists from Greifswald, Berlin and Lübeck, followed nearly 150 alcoholics for 14 years. The researchers’ results will be published in the January edition of the US journal “Alcoholism: Clinical & Experimental Research.”

Work on the study began in 1996, when the researchers started collecting and analysing medical data on more than 4,000 randomly selected residents of Lübeck and 46 neighbouring communities.

The group of 119 men and 30 women identified as alcoholics were observed for more than a decade.

John said that although researchers did not investigate the causes of death, it was assumed that alcohol dependency was the “dominant ailment.”

But scientists were unable to explain why women reacted more negatively to alcohol consumption than men – since, as John said, smaller body mass alone could not account for the trend.

He also called for a new debate over alcohol prevention – labelling Germany a “high-consumption country.”