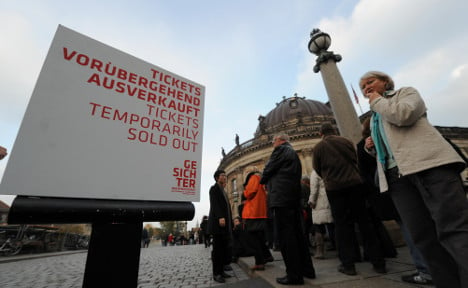 People who want to get from London’s University Library to Covent Garden and want to get out of the rain, or perhaps are in a hurry, take a route through the British Museum. You are greeted by a guard on the way in, pass through the Gallery of Living and Dying in the Great Court, go around the old Reading Room and walk out the other side. You don’t have to hand in your umbrellas – and you certainly don’t pay entry.

And who knows where a person’s curiosity might take them once they enter the world’s oldest museum? They could look into the Islam gallery, or the gallery of the cafe devoted to Coptic Christianity – a route which leads through hordes of excited schoolchildren as this is also the way to the much loved mummy section.

What a contrast to Berlin’s Museum Island. Once one has got through the transaction at the pay desk and arrived in the Bode Museum, the squeak of shoes is the only sound – that or a reprimand for wandering between the sculptures with a coat hung over an arm. The feeling is of being an invader – one wishes that it was a little like in London where the museums are filled with life, curiosity, business and joy.

There are 13 British national museums, nine in London, as well as countless private museums such as the Saatchi Gallery, the University Museums in Oxford and Cambridge or the city museums of the Victorian industrial cities like Manchester and Liverpool, which invite people in for free – and nearly all without the German institution of a closed day each week.

The result is that London museums play a big role in the lives of the people. Not only do more people go to museums, they go more often, in a more relaxed manner, and also just for 20 or 30 minutes. “Even the women are more elegant,” said Martin Roth, the new German director of the Victoria and Albert Museum.

He can hardly believe his luck to be in charge of the super-cool museum which once advertised with a slogan saying it was a cafe with a nice museum attached.

“How I fought in Dresden to reduce the barriers. German museums fear for their intellectuality and scientific reputation, are scared of losing their identity.” Roth tripled visitor numbers in Dresden, but failed in his fight against the weekly closed day. But, he said, German museums envy their British colleagues for their style and elegance.

No wonder. The free entrance is the basis of a museum culture which plays a central role in London’s position as a global capital city, centre for art and the most popular tourist destination in the world.

What is decisive is how these museums contribute to London’s civilised, relaxed urbanity. Ladies meet for tea at the world’s oldest museum restaurant at the V&A, and then take a stroll through the Renaissance gallery. On late opening Thursdays, disco music fills the halls and one can stand next to Giambologna’s Samson, a glass of champagne in hand. In the National Gallery civil servants from Whitehall take a quick look at their favourite painting during their lunch break. And where better to meet for a rendezvous than in the pulsating Tate Modern?

Part of the public space

Museums are part of the public space, like shopping centres and parks, but they expand them, and the public consciousness with their treasures, their history, their glamour, their celebration of humanity. Just as the department store of the 19th century democratised consumerism, the modern museum does the same for knowledge, education and beauty. For the British, that is today so self-explanatory that it is not questioned even in times of great budgetary pressure.

According to specialist magazine Art Newspaper, six of the world’s 20 most visited museums in 2011 were in London. Germany’s most visited museum, the Dresden Residenzschloss, was at number 29 – and Berlin’s New Museum was at 38, with 1.14 million visitors.

The Pergamon Museum, which sees itself as a world-class museum, has something over a million visitors. This is fewer than the Ashmolean in Oxford, population 154,000. Free entry does not pull in the unwashed masses who step on the toes of the elite, as some German museum directors fear. Rather museums become part of civil society.

Michael Eissenhauer, general director of the Berlin State Museums, says that a third of the city’s visitors already enjoy free entry – including all those under 18 – and that the hurdle to free entry is kept as low as possible. But at the same time he says, “We live from tax money and therefore take our responsibility seriously to contribute something to the finances from our own income.”

Collections belong to the nation, not the state

In England the same argument is used the other way around. During the fight against entry fees under Margaret Thatcher, the argument which won was that it was absurd to demand money to see works which in any case belonged to the visitors.

The art of museums belongs to the people – they are bought, cared for and exhibited with tax money. Often they are gifts to the nation – not to government bureaucracy or the state.

The British, unlike the Germans, draw a clear difference between nation and state, people and government apparatus. Thus, the British museums belong to society, but the German ones to ministerial bureaucracies.

A board of trustees is placed between the government – as the most important source of funding – and museum directors. Ministers appoint the trustees on recommendation, but remain at arm’s length from decisions – in contrast to Germany, where Culture Minister of State Bernd Neumann is chairman of the Trust Board of the Prussian Cultural Heritage Foundation.

Sean Rainbird, director of the Stuttgart National Gallery, concluded this spring that the model of a hierarchical relationship between a superior authority and subordinate institute does not work. In Stuttgart he secured three sponsors to fund free entry for the State Gallery for half a year – and visitor numbers rose by 250 percent. But there was not enough time to establish a new museum culture and support from above was missing.

For Roth the advantages of free entry are undeniable. “Education, participation, integration,” are the core responsibilities of museums, and are promoted by free entry, he said.

The museum expert said free entry was entirely feasible for the big German museums. A two-year test phase would be easy to execute – one would only have to secure the museums against financial risk.

“But the initiative must come from the ministers,” he said.

Why? Perhaps Berliners should stop only talking about museum projects, architecture plans and switching of collections from one place to another, and instead demand more museums in their lives – and more life in their museums.