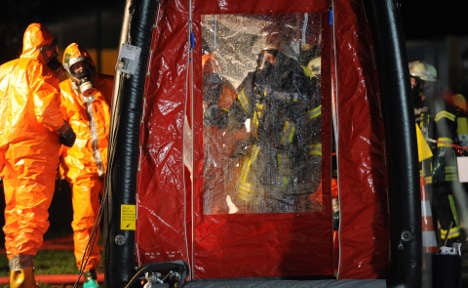 “At around 1 pm a tank of sodium hydroxide solution was by mistake filled with nitric acid,” said Heike Hauerken, spokeswoman for Kraft Foods, at the factory in Bad Fallingbostel, between Bremen and Hannover. The chemicals are used for cleaning.

A reaction started while fire fighters tried to pump the nitric acid out of the tank, producing a poisonous cloud of nitrous gases considered extremely harmful if they come into contact with skin or are inhaled.

The 250 or so people working at the factory were evacuated, as were around 800 people living in the immediate vicinity – but shortly afterwards the risk zone was enlarged to around 500 metres in radius and a further 1,000 or so people were told to leave their houses.

Emergency accommodation was set up for them in nearby halls, and Stephan Meier, spokesman for the regional fire brigade, said the evacuation ran smoothly. The A7 autobahn was also closed for a short while.

Around 1,000 fire fighters and hazardous chemical specialists worked through the night even after the poison gas cloud cleared, as the chemicals in the tank needed to be separated and the risk remained that more toxic fumes could be released.

The scene was likened to a disaster movie, with hundreds of specialists working in protective suits. Their work was slow, said Meier. “We have to swap in the specialists every 20 minutes, and then we also need new protective suits – and they are running short.”

It was not sure that those evacuated from their homes would be able to return on Tuesday.