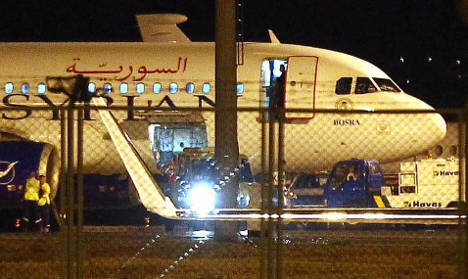 “Turkey doesn’t have to tolerate weapons or weapons-relevant goods being transported to Syria over Turkish territory or through Turkish airspace,” said Westerwelle.

Only if Turkey could feel the solidarity of its partners – including NATO partners – would it be able to act prudently and work towards de-escalation, he said. Turkey did not have to tolerate Syria’s President Bashar Assad arming his army via Turkish airspace, he said.

A second plane was stopped as it flew across Turkey on Monday. After an inspection, the Armenian plane was allowed to continue its journey to Aleppo – but a plane was stopped last Wednesday en route to Damascus from Moscow, and its contents confiscated.

And although Westerwelle kept to the joint European Union line of opposing any weapons supply to the country – including the opposition – he also added, “We should not forget – the violence is coming from the Assad regime.“

Turkey’s Europe minister told a German newspaper his country needed more help from the EU to deal with the more than 100,000 Syrian refugees which have crossed the border into Turkey. He said the EU was too concerned on its debt crisis to realise what was going on.

“Europe should start thinking about the people who have fled Syria into Turkey,” Egemen Bagis told Die Welt newspaper.

“Europe is in a state of paralysis. There is no progress because it is completely fixated on the euro crisis,” he said.

The Turkish disaster agency AFAD said on Monday that the number of Syrians fleeing the conflict in their homeland and seeking refuge in Turkey has now reached 100,363.

Bagis spoke as EU finance ministers met in Luxembourg to ramp up pressure on Syria and also Iran over its disputed nuclear programme.

In September, the European Commission announced an additional €50 million in humanitarian aid to help civilians caught up in the violence.

That brought the total available from the Commission to €119 million and the EU’s contribution in all to €200 million, or half of all international help offered at that point.

But Bagis demanded more, telling Die Welt: “Europe has to help people who need a safe haven. It’s time for Europe to finally help out.”

The United Nations estimates that more than 2.5 million people have been affected by the fighting. There are more than 348,000 Syrian refugees registered in neighbouring countries, but many more are unregistered.