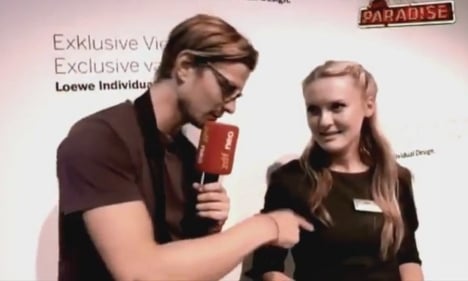 Joko Winterscheidt und Klaas Heufer-Umlauf, who co-host a weekly show on ZDF Neo called “Neo Paradise” were filmed wandering around the IFA consumer electronics trade fair in Berlin at the beginning of September.

At one point Klaas dared Joko to touch one of the conference hostesses once on the breast and twice on the backside. “I can’t do that,” he said at first, before deciding he would make it “quick and painless.”

While Klaas made a joke about dispensing with foreplay, Joko approached the young woman and spoke briefly before carrying out the dare.

Later Klaas commented on air, apparently joking, “That made her really uncomfortable. She stood there and looked really humiliated. She’s probably going to go home and cry in the shower. She’ll probably be standing in the shower for six hours.”

Several viewers complained to ZDF about the October 4 broadcast, which many blogs said amounted to sexual harassment.

“The entire scene was completely repulsive. I was sitting in front of the screen and couldn’t believe that a woman was being sexually harassed in front of rolling cameras, and the whole thing is sold as a big joke,” the blog Emmi wrote.

In an emailed response to complaints, ZDF offered no apology and claimed that Joko had not actually touched the woman. “The film crew along with both moderators spoke with the conference hostess after the filming,” it said. “The scene was broadcast with her permission.”

Heufer-Umlauf has since apologised via his Twitter account. “We showed no tact at all,” he said. “We confused funny nonsense with careless and offensive idiocy. We are honestly sorry.”