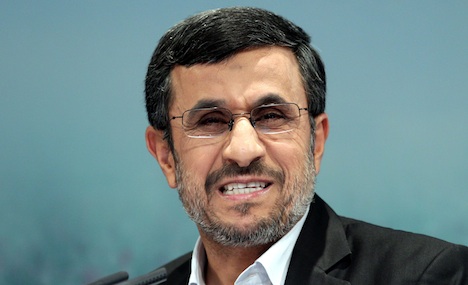 “Iran has not moved on any of the important questions over the past few months. Therefore, we must increase the sanctions pressure,” Guido Westerwelle said in a statement.

“By imposing further sanctions, we want the EU tomorrow to send a clear signal to Tehran,” said the minister, adding that there was still the opportunity for negotiation.

The offer remains for “substantial talks with the clear goal of stopping Iran having a nuclear weapon,” said Westerwelle.

“It is time for a political solution,” he stressed.

Diplomatic sources said last week that EU member states had agreed to step up sanctions against Iran, focusing on dealings with banks, trade and gas imports.

One diplomat said the “tough package” of new sanctions would be endorsed at a meeting of EU foreign ministers in Luxembourg on Monday.

A diplomat who asked not to be named said ministers will agree for the first time to hit Iran’s telecoms sector, aiming at companies believed to provide financial support for Tehran.

All dealings between European and Iranian banks will meanwhile be banned above a certain “relatively low” threshold, although exceptions will be allowed in some medical and humanitarian cases, the diplomat said.

Many in the international community suspect that Iran’s nuclear programme is aimed at developing atomic weapons, a charge which Tehran denies, saying its activities are peaceful.

It has refused to suspend the most controversial parts of its programme, most notably uranium enrichment, as called for under multiple UN Security Council resolutions.

This is in spite of four rounds of UN sanctions and additional US and EU measures this year that have hit its economy hard, and the looming threat of Israeli military action, possibly backed by Washington.