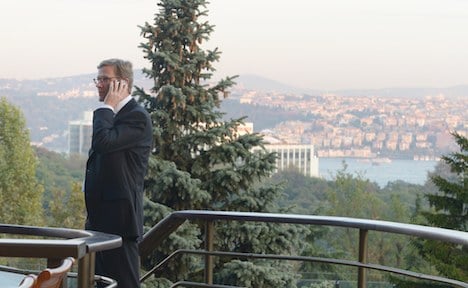 As the politicians met, rebels on the ground and activists said a Syrian regime warplane was shot down near the embattled northern city of Aleppo.

With rebels controlling large swathes of the border area, a series of incidents of cross-border fire this month sparked retaliatory shelling by NATO member Turkey and raised international concern about potential escalation.

After meeting with Westerwelle, Turkish Foreign Minister Ahmet Davutoglu repeated Turkey’s position that they would not tolerate any further border incidents.

“Fresh border violations can take place and we will hit back without hesitation if we believe Turkey’s national security is in danger,” he told reporters.

Westerwelle reiterated Germany’s support for its NATO ally Turkey, while at the same time appealing for restraint.

“We are on Turkey’s side but we also call on Turkey to show moderation,” he said.

With rebels controlling large swathes of the border area, a series of incidents of cross-border fire this month sparked retaliatory shelling by NATO member Turkey and raised international concern about potential escalation.

Westerwelle, whose visit to Turkey was hastily scheduled, had called for calm and restraint ahead of his meetings. “It is important that no one pours oil on the fire,” he said.

Syria said it was ready to establish a joint committee to oversee security on the border, as Turkey stepped up warnings of reprisals for any further shelling, such as that which killed five Turks on October 3.

The Syrian foreign ministry said it has been discussing with Russian diplomats the idea of a joint committee to avoid border misunderstandings.

Brahimi, a veteran Algerian diplomat who is envoy of the United Nations and the Arab League, arrived in Istanbul from talks in Saudi Arabia.

The Damascus regime accuses Riyadh and Ankara of arming rebels seeking to overthrow it.

Turkey intercepted a Moscow to Damascus flight on Wednesday, confiscating its cargo.

Westerwelle backed Turkey in the row over its interception of the plane from Moscow. Turkish authorities said they had confiscated radar equipment, provoking angry responses from both Moscow and Damascus.

Russian Foreign Minister Sergei Lavrov said the Syrian Air flight had been carrying radar equipment that could have either civilian or military uses, and insisted that Moscow had violated no laws.

“It was morally justified for the Turks to do that,” said Westerwelle, adding that Germany would have done the same thing.

During his visit to Istanbul, Westerwelle had talks with the leader of the main Syrian opposition alliance the Syrian National Council, Abdel Basset Sayda.