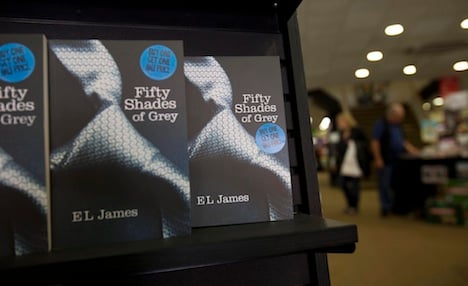 “The Perfect Submissive,” “Body Temperature And Rising” and “Dark Desires,” the titles published by British specialist publisher Xcite leave little room for doubt over their content.

The books were unashamedly on display in the bustling corridors of the Frankfurt Book Fair, the world’s biggest publishing event due to close Sunday, and are enjoying a boost thanks to the advent of the electronic book.

“Print book sales were starting to decline. Getting into the major book stores was difficult. Some stores are not happy to take them and the buyers are very hard to reach,” he said.

And then “Fifty Shades of Grey” came along.

“It raised the attention level or people’s awareness of erotica. It made it more mainstream, more acceptable. It’s no longer something you don’t talk about, it’s in the bestsellers’ charts,” he said.

Xcite now expects its ebook sales to be three times higher than the printed book sales this year.

“We sold a lot of electronic books this year without doing much publicity. That really surprised us,” she said.

“We don’t actually see the gender of the customer but… the writing itself is aimed at women, and it’s written mostly by female authors who are writing for women,” said Ferris, of Accent Press which also publishes thrillers and cook books.

Discretion could be the key.

And, as Ferris pointed out, the reader can also retain their own anonymity by downloading ebooks without having to go into a shop.

“You can even erase it once you’re finished so nobody knows what you’ve been reading,” he said.