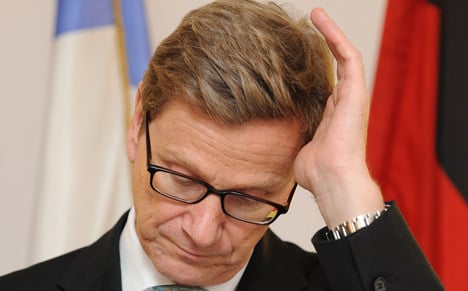 Westerwelle, who is on a trip to China, said in a statement he would hold talks Saturday with his Turkish counterpart Ahmet Davutoglu in Istanbul on “the situation in Syria and on the Turkish-Syrian border.”

“The Syria situation has escalated. That fills us with the greatest concern,” he said. “It is important that no one pours oil on the fire. We are counting on moderation and de-escalation.”

Westerwelle said his visit was intended as a “sign of solidarity” with a NATO ally and condemned recent shelling of Turkey, calling it “unacceptable”.

“It is important that no one succumb to provocation and that we continue working on a new democratic start in Syria,” he said.

“I want to hear for myself what was behind the forced landing of the aircraft and the confiscation of goods from the plane in Turkey.”

Friction between Syria and Turkey escalated on Thursday when Ankara said it had found military supplies on a passenger plane it intercepted en route between Moscow and Damascus.

The Syrian foreign ministry accused Turkish Prime Minister Recep Erdogan of lying after he said the jet had been carrying “equipment and ammunition shipped to the Syrian defence ministry” from a Russian military supplier.

Turkey’s allies have warned of the risks embedded in the conflict between the neighbours, which have exchanged fire over their border in recent days, amid fears that the Syrian civil war could set off a regional conflagration.