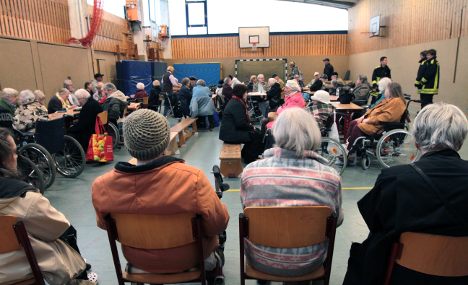 Experts are now hoping the device can be safely defused.

By 7.30 am 10,500 inhabitants of the 600-metre exclusion zone had left their houses and taken shelter in a school, in what Die Welt daily newspaper on Friday described as one of the largest evacuation operations ever seen in Brandenburg.

The 250-kilogramme US bomb was discovered on private property in a residential area, wrote the paper.

The landowner called in a bomb disposal team after hearing about damage caused when a World War II bomb was detonated in central Munich in August.

The man grew concerned after remembering family rumours that a bomb had fallen near his house during the war, local authority spokesman Markus Klier told the paper.

Authorities said it was not possible to move the bomb, which will now have to be defused where it is. Several streets have been cordoned off as a precaution.

330 supervisors were sent out by local authorities to oversee the evacuation, as well as the police and fire brigade.

The displaced residents – many of them elderly – are now waiting to return to their homes in a temporary shelter in Pierre-de-Coubertin-Oberschule, wrote the paper.

The World War II relic should be defused by 11am, if the operation goes according to plan. But as a last resort, if the bomb cannot be made safe, authorities will attempt to move the device before detonating it in a controlled explosion, Klier told the paper.

Another US World War II bomb caused several million euros worth of damage to a number of buildings in central Munich when it had to be detonated in late August.

Two buildings were also damaged in the western town of in Viersen in September when a further World War II bomb could not be defused and was blown up.