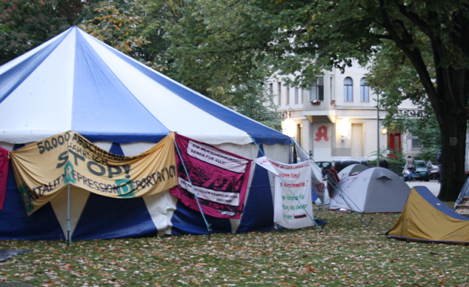 On September 8, a group of 20 asylum seekers and activists set off on foot from the southern German city of Würzburg. As they marched up the country, banners in hand, they stopped off at different refugee shelters, urging fellow Flüchtlinge to join them.

The group grew to 200 people, some of whom travelled to the city in buses organised by the Refugee Tent Action, a group that organised and successfully executed the protest march.

Twenty eight days after leaving, the protesters arrived in Berlin and pitched camp on Oranienplatz, in the multicultural district of Kreuzberg. Since October 6, more tents have sprung up, signalling that the group intends to stay until their voices are heard.

‘The government refuses to accept that I exist’

Humming with music and bustling with people on Wednesday evening, the city-centre camp consisted of about 10 large marquee tents and a scattering of smaller ones. Berliners walk past and pick up information leaflets from the welcome hut.

“The right to asylum is not a privilege, it is a human right,” said one slogan on a large poster. “In refugee camps we have forgotten the life outside the walls so that we even forget how days passed before we lived there,” says the Tent Action manifesto.

What the group wants, and why they want it, is clear. An end to obligatory limited residence, to deportation and to close, or at least improve, the notoriously bad housing complexes that the government provides those fleeing their homeland, and often political or religious persecution. Some would face certain imprisonment if they were to return.

One bearded man, who would only give his name as “Refugee”, told The Local, “The government refuses to accept that I exist, so my name does not matter.”

“No one is listening, that is why we are here, and we will fight until they do,” he said. “The public need to open their eyes, I don’t care if they think we are all terrible, I just want people to know what is happening.”

“I have been homeless for two years, I’m in no-man’s land,” he said. But gesturing around to the camp, the 28-year-old seemed animated and determined. “It’s much better here than it is in the camps the government gives us.”

The media was, he added, serving to spread negativity towards refugees in Germany. He was largely right, as the country’s papers tend to report simply that asylum seekers figures are out of control.

Beneath the headline “Asylum applications climbing rapidly,” the Bild daily published figures from the Federal Office for Migration and Refugees (BAMF) saying that 3,744 requests for asylum have been filed this month alone. If the trend continues, the paper said, there should be 11,700 new bids by the end of October – a quarter of the entire figure for 2011.

But refugee housing is often vastly oversubscribed, and in Bavaria tents were last week set up to house those who could not be given a bed. With winter looming, conditions are far from ideal.

Hundreds are expected to march across the capital on Saturday, demanding the government think about how they tackle incoming asylum seekers. Until recently, those arriving received less financial support than people on basic state welfare.

But cold nights and poor living standards have not deterred refugees from seeking shelter in Germany.

The atmosphere in the camp was calm on Wednesday, but this will probably change when the demonstration march reaches parliament on Saturday. One woman said that although the walk was strenuous, she was looking forward to Saturday.

“We want the public to hear our demands,” she explained. She, like her fellow unnamed protester, refused to say which country she had fled.

Neither of them could say what should happen or where refugees should be housed if their current accommodation were to be shut down.

The German government recently revamped its resettlement programme, which now grants 300 refugees a year of full residence and financial support.

The protest will start at 3pm on Saturday, at the Oranienplatz camp. It will progress through the city and end outside the Bundestag. How long the camp will remain is unclear, but the group are not going to leave without a fight.