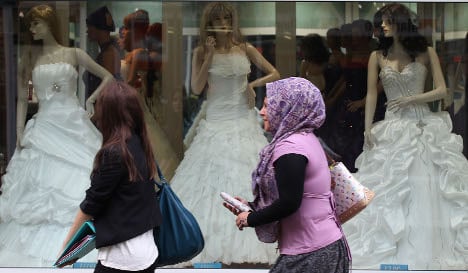 The new website lists counselling centres nationwide and victims can chat anonymously with advisers or write them an email.

“That’s one of the biggest things we heard in feedback sessions with victims, that they wanted to see real-life examples of women who had successfully navigated a similar situation,” Rahel Volz of Terre de Femme told The Local.

The new portal has a preventative focus, but also offers support to those who have already been married against their will and would like help dissolving the marriage.

Many of those women have suffered emotional trauma or marital rape as part of the experience and need counselling, said Volz.

The majority of incidents of forced marriage in Germany involve people with Turkish roots.

“Quite often the victims come from an immigrant background, but they themselves were born here or went to school here,” Volz said.

Forced marriage differs from arranged marriage, in which both parties voluntarily agree to have their spouse selected for them.

In forced marriage, victims are threatened with violence and even death if they don’t marry the person their families have chosen.

“Often, the victims will visit their parent’s native countries during the school summer holidays and are forced to marry while they are there,” Volz said.

Men as well as women can be victims of forced marriage. A 2011 survey of crisis help centres in Germany found seven percent of forced marriage victims were men. In total, 3,443 people sought help at counselling and information centres in 2008, the last year for which figures were available.

Terre de Femme believes the actual numbers may be even higher, as many people are reluctant to report such a personal crime.