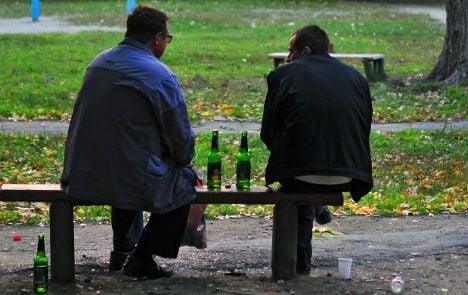 In mid-September, Uwe Reinders erected a 20-metre long privacy wall around his Bodepark shopping center in the town of Staßfurt.

“I’ve been trying for four to five years without success to get help from the city and the police,” Reinders told the TAZ newspaper.

The city’s mayor René Zok conceded that there are drinkers in the park in the summer months, but “no more than in other cities.” But those warming the park benches argue the problem is actually noisy teenagers who flock to the park at night.

City hall has called the two-metre high wall “a disgrace” and many residents agree – graffiti reading “The wall must fall!” and “We are the people” appeared almost immediately after its construction.

Opponents are hopeful that the wall might not be around for much longer. Reinders built on private property, wrote the TAZ on Thursday, but failed to take into account but that the area was under historical protection.

In September, the city of Staßfurt won the German Urban Development Prize for its redevelopment of the downtown area, which means the wall builders were obligated to obtain a special construction permit, which they failed to do.

At the city council meeting in late September, Mayor Zok said a retroactive application would not be approved.

“The wall destroyed the village, and is illegal,” said Wolfgang Kaufmann, head of construction in the city administration.

Reidner’s representatives are set to meet with city officials for talks on Friday. In the past, Reidner has proposed beautifying the wall with flowers and art, as long as alcohol consumption is banned in the park. But that’s unlikely to satisfy most residents, who want to see the wall torn down.