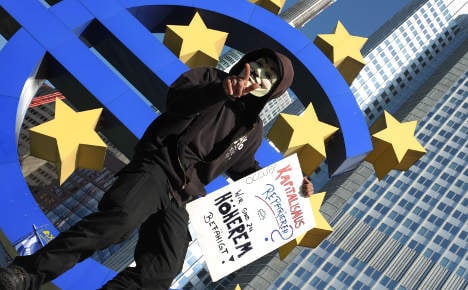 The four institutes – Ifo in Munich, IfW in Kiel, IW in Halle and RWI in Essen – also lashed out at the European Central Bank, saying its latest anti-crisis measures risked fuelling inflation in the 17 countries that share the euro.

“The euro crisis is negatively impacting economic activity in Germany,” the institutes wrote in their joint twice-yearly forecasts, published here on Thursday.

“Should the situation in the eurozone continue to deteriorate, this will also impact the German economy. Over the forecasting period as a whole the downside risks prevail and there is a great danger that Germany will fall into a recession,” they warned.

While Germany clocked up growth of 0.5 percent in the first quarter and 0.3 percent in the second quarter, “there are currently a large number of signs that overall economic expansion will weaken towards the end of the year,” they wrote.

As a result, gross domestic product (GDP) was projected to grow by 0.8 percent overall this year and by 1.0 percent next year.

That marked a downgrade from the institutes’ previous spring forecasts when they had been pencilling in growth of 0.9 percent for this year and 2.0 percent for next year.

Furthermore, the latest forecasts were based on the assumption that the situation in the euro area, currently grappling with its worst-ever crisis, would stabilise.

If it did not then Germany, which has held up much better to the long-running crisis than its eurozone partners, could fall into recession, they said.

Turning to the ECB’s controversial decision to buy up the sovereign bonds of debt-wracked countries under its so-called OMT programme, the experts said such measures risked fuelling inflation in the single currency area.

The institutes “see the risk of a mid-term rise in inflation,” they said.

“This process could be triggered by the ECB effectively providing monetary financing for states. Europe’s citizens and players in the markets may lose trust in the ECB’s ability to ensure long-term price stability as a result,” the report said.

The ECB’s Outright Monetary Transactions (OMT) programme, as well as its predecessor the Securities Market Programme (SMP), have frequently come under heavy fire in Germany as being a covert way for the central bank to pay off countries’ debt by simply printing money.

“In the longer term there is a great danger that the ECB will continue to purchase bonds and provide excessive monetary policy stimulation even if states deviate from the adjustment programmes, which could drive up prices and lead to an increase in inflation expectations,” the institutes warned.