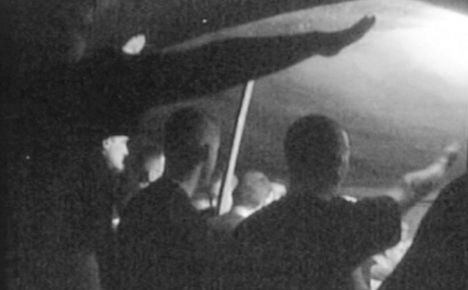 For much of this year, the German media has been awash with news of the National Socialist Underground (NSU), a neo-Nazi terrorist group thought to have murdered at least ten people over a decade. The NSU’s existence only became public when two of their members committed suicide after police cornered them following a botched bank robbery.

Many media outlets treated the revelation as surprising new evidence of an armed far-right underground network, but one undercover journalist has been investigating the scene for years, filming footage from neo-Nazi concerts that showed a flourishing music scene and a growing readiness for violence.

Along with Ohlendorf, Thomas Kuban (an alias) made the footage into a documentary, which, other than being screened at the 2012 Berlin Film Festival, is yet to receive widespread attention. The title of the film, “Blood Must Flow,” is taken from a track repeatedly played at concerts.

Kuban spent six years dressing as what he called a “typical fascist pig” and wangling invites to secret concerts, where he secretly caught images of braying crowds and hundreds of arms raised in the Sieg Heil salute. He risked his life every time, Ohlendorf told The Local.

Seeing hall after hall of self-declared “Aryan warriors” chanting along with lyrics like “we shit on the freedom of this Jewish republic,” – Kuban and Ohlendorf hoped to help open Germany’s eyes to homegrown extremism and the role music plays in recruiting young people to the far-right.

In fact, the film shows a thriving neo-Nazi music industry. Over 100 records are released each year from around 30 specialist record labels and there are countless online shops where merchandise is sold along with the music.

But the scene remains largely ignored, and not one German television channel has opted to air the documentary despite its unsettling content. Ohlendorf says this has nothing to do with the often shaky camera work and questionable soundtrack, but to a lack of mainstream interest. “You have to ask what media outlets want, just to drive traffic?” he asked.

“People are more interested in religious extremism and would rather be distracted by that than concentrate on what’s going on under their noses,” he explained. “When Muslims are made out to be the dangerous ones, then politicians are playing into the hands of neo-Nazis.”

In the film, Kuban can be seen at a number of Bavarian Interior Ministry press conferences, asking politicians what they are doing to stop neo-Nazis. Often they simply dismiss him and move the discussion on.

The police also feature heavily in “Blood Must Flow,” and Ohlendorf thinks that they are also being far too passive. “Often action from the police at these events is more of a token gesture,” he said.

This is evident in the film, where police officers are seen waiting outside concerts. “We’ll wait until they do something illegal,” one says, as a crowd of hundreds roar along to a band urging them to kill Turks. “We’ll just let them finish the party,” said another.

Door to the far-right

Ohlendorf believes that not only do the lyrics incite violence, the music is actively used to recruit young Germans for the far-right scene. “In villages, where there is often little else to do, recruitment starts with the offer of free beer and live music,” he said.

But what was perhaps more shocking for the 51-year-old director was the well-educated Germans that Kuban met on his travels. “It’s not just skinheads at the concerts, but intellectual people whose involvement is threatening to bring neo-Nazism into the mainstream.”

“People have lost trust in the government and are starting to think politicians are only bothered about money,” he said. But he added that responsibility should not just be passed off onto the state – the police and the public should also raise awareness and “take control of their own destiny.”

After revelations about the extent of the NSU murders broke last year, many editorials argued that, when it came to fascist activity, the country suffered from a “blindness in the right eye” – as the German phrase has it. But Ohlendorf thinks this eye has never really been open. Moves to ban the neo-Nazi National Democratic Party are yet to come to fruition, but even that – the “legitimate” political face of neo-Nazism – is just one head of the hydra.

“Banning the NPD is just one aspect, but what is important is how we combat day-to-day far-right violence,” he says.

He sees one positive model in the Berlin police force, whose zero-tolerance policy on extremism is a model that police forces and intelligence authorities should adopt in the rest of the country.

During the filming, the pair also met a group of vigilantes who managed to stop an annual far-right festival from being held in their village.

“There are lots of engaged citizens, but there needs to be more who stand up against racism,” says Ohlendorf. Prevention, he added, was vital, and should start as early as possible. Ohlendorf spent the summer touring schools with his film, and discussing it with pupils. “Generally the film was well-received, but in most schools there were one or two who watch the film and say ‘yeah, but..foreigners,’ ” Ohlendorf explained.

Meanwhile, Kuban remains undercover after receiving death threats from neo-Nazis who found out they had been secretly taped. He still disguises himself in a mustard-yellow suit, wig, and sunglasses when he goes to press conferences.

“The outfit was supposed to provoke a reaction,” said Ohlendorf. “It’s meant to give him the role of a jester, who was the only person in a royal court allowed to tell the truth. His outfit made him into a lighthouse shining on the fact that there was a huge deficiency of information on neo-Nazis.”

Kuban explains in the film that setting foot in the concert venues never stopped being terrifying. If anyone in the audience spotted the cables inside his coat, he could well have been beaten up, or worse. But this was, he and Ohlendorf felt, a necessary risk.

For Ohlendorf, ignoring the far-right has only served to create an environment in which underground networks like the NSU can grow. Without action, new groups could easily emerge to take their place.

Watch a clip from Blood Must Flow here: