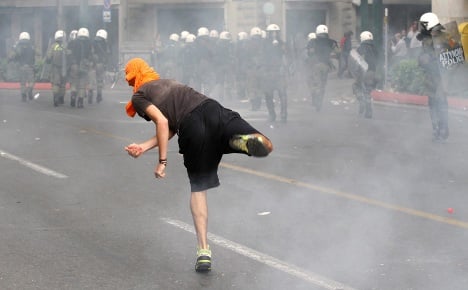 While the German leader hailed the progress of reforms undertaken by Athens, 25,000 protesters brandishing banners reading “You are not welcome, Imperialisten Raus” (Imperialists out)” or “No to the Fourth Reich” vented their anger against the budgetary discipline preached by the German leader.

Two Nazi flags were draped on a steel barricade near parliament and set on fire.

Vilified for the punishing spending cuts imposed in recession-hit Greece, Merkel, the leader of Europe’s paymaster, is on her first visit to the country since the eurozone debt crisis erupted almost three years ago.

Merkel has become a hate figure in Greece over the tough spending cuts imposed on the country in return for promised loans and debt relief worth about €347 billion ($448 billion).

She has even been depicted as Adolf Hitler in Greek tabloid caricatures.

On her first visit to Greece in five years, Merkel said: “I am deeply convinced that this tough path is worth it and Germany wants to be a good partner. “A lot has been achieved. There is still a lot to do and Germany and Greece will work very closely together,” she added.

Samaras, a conservative who took office after elections in June, responded: “Greece is determined to keep its promises and overcome the crisis… the Greek people are bleeding right now, but they are determined to win the battle of competitiveness.”

Merkel’s visit comes at a crucial time for Athens, which is locked in negotiations with its international creditors over a €13.5-billion package of further cuts in order to win further bailout funds.

Berlin and Athens have both sought to sell Merkel’s visit as a gesture of solidarity and encouragement for Greece’s reform efforts, but many Greeks said the trip only served to fan anger.

Christina Vassilopoulou, a 37-year-old teacher said she had turned up to protest “the decisions taken at European meetings where Merkel manipulates the participants.”

“I have a doctorate and I make 900 euros a month, 400 less than before. We have children that go hungry and most of the parents are unemployed,” she said.

“We, as Anonymous, are next to the Greeks claiming their freedom. We are next to a people who have fought against the German occupying forces,” it said.

“If she wanted to help, she should have done it sooner,” she told AFP.

The German chancellor is also scheduled to meet President Carolos Papoulias and a delegation of Greek and German businessmen before departing in the evening.

Shortly before her arrival, Greece’s international creditors – the International Monetary Fund, the European Union and the European Central Bank – piled further pressure on Athens to live up to its austerity pledges made in exchange for crucial loans.

Greece is counting on a positive outcome from the EU-IMF talks to unblock a €31.5-billion installment from Greece’s EU-IMF bailout package, which is needed to recapitalise banks and repay outstanding domestic debts in a country that is heading for a sixth straight year of recession.

Samaras said Friday that his country could not take more bitter medicine and warned that if the next aid tranche did not arrive soon, state coffers would be empty by November. Greece’s debt amounted to about 160 percent of gross domestic product in 2011, according to official figures.

International creditors on Monday gave Athens an October 18 deadline – the date of the next European Union summit – to implement reforms in exchange for slice of loan, which has been pending since June.

“We stressed that before the next disbursement, Greece clearly and credibly should demonstrate its commitment to fully implement the programme – and 89 prior actions from March should be implemented by the 18th of October at the latest,” Eurogroup chairman Jean-Claude Juncker said at the close of talks with finance ministers from the 17-nation single currency area.