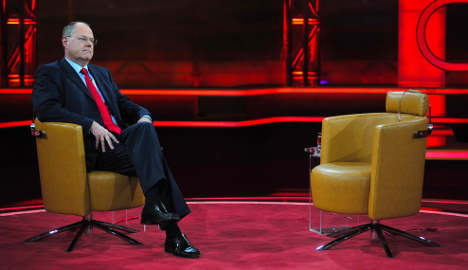 Appearing on the Günther Jauch talk show on state broadcaster ARD, Steinbrück rejected mounting criticism over his personal finances, but said an independent auditor had been hired to review his records and dispel any lingering doubts.

In a statement on his Bundestag website, the SPD candidate said the audit would prove that “the attacks from within the ranks of the CDU/CSU and FDP on my credibility are baseless, hypocritical and duplicitous.”

Steinbrück also announced plans to back tougher earnings reporting rules that would require all members of the Bundestag to report the source and substance of supplementary income “down to the last cent.”

In information posted on his webpage, Steinbrück claimed to have given around 80 paid lectures and speeches since 2009, which are thought to have netted him at least €500,000 in income. Yet many of those entries list the agency that arranged the lectures, not the actual client.

A report published Sunday in the Welt am Sonntag newspaper said Steinbrück had been cashing in on five-figure paychecks for speeches to the finance industry since 2009.

The SPD politician has rejected accusations that he enjoys a cosy relationship with the banking lobby, but rival conservatives have been quick to question the ex-finance minister’s credibility.

“That Mr. Steinbrück of all people is trying to cast himself as a champion of transparency has a special kind of humour,” the general secretary of the CSU Bavarian conservatives, Alexander Dobrindt, told the Frankfurter Allgemeine Zeitung on Sunday.