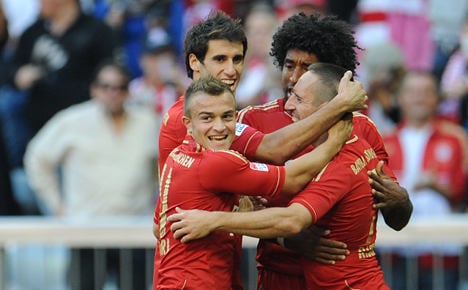 France winger Franck Ribery scored either either side of half-time on Saturday as Bayern picked up their seventh consecutive victory.

The last team to claim seven straight wins was Mainz in the 2010/11 season, while Bayern last did it in 1995/96 – but in both seasons Dortmund went on to win the title, as they have done for the last two years.

“We are out to break that sequence,” said Schweinsteiger, as Bayern went five points clear at the top of the table with Dortmund fourth before Sunday’s game at Hanover 96. “We can’t complain about a record of seven wins.”

Bayern host Dortmund on December 1 in the Bundesliga and Ribery said the Bavarians should just worry about their own form.

“We have to be looking at ourselves, not at what Dortmund and other clubs are doing. I hope it continues this way until next year,” said Ribery.

Bayern suffered a 3-1 shock defeat at BATE Borisov on Tuesday in the Champions League – their first defeat in 10 competitive games this season. Ribery said victory over Hoffenheim was the perfect response.

“It was important to win again after losing our last match. Defeats like Tuesday’s do happen, but we’ve reacted well,” said Ribery ahead of the international break.

“And it’s nice to keep a clean sheet as well. We have to keep it up now.

“It was important for our confidence, because a lot of players are off to their national teams now. We’ll try and win all our games. Obviously it’s not easy, but we have a good squad.”

There appears to be more harmony at Bayern now with the simmering row between coach Jupp Heynckes and director of sport Matthias Sammer having been resolved, according to chairman Karl-Heinz Rummenigge.

Matthias had annoyed Heynckes by criticising the team for an unconvincing first-half display in their 2-0 win at Werder Bremen last Saturday which was only decided by two late goals.

Heynckes hit back by saying any issues should be dealt with internally and the subject has been bubbling in the German media all week.

But Rummenigge said he had moderated a frank discussion between the pair on Tuesday and Heynckes said he was impressed with Bayern’s performance.

“You have to take into account that we had another tough game on Tuesday, but we still played intelligent and clever football and had everything under control in defence,” he said.

“We dominated the match and prevented Hoffenheim creating any chances. We were highly motivated and took control right from the start.

“Once we’d taken the lead, I knew our forwards were always good for another goal. The most important thing is keeping it tight at the back.”

The only negative aspect for Bayern was that captain Philipp Lahm finished the game with heavy bruising on his shin, while midfielder Thomas Müller went off in the first-half with a cut cheek.

Both are in the Germany squad for World Cup qualifiers against Ireland in Dublin on Friday and Sweden in Berlin on October 16.