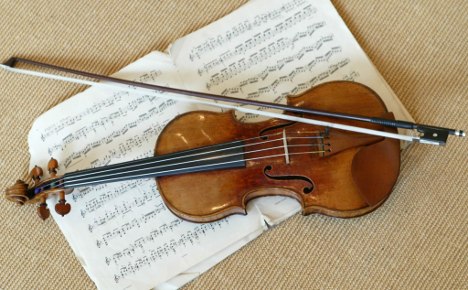 German authorities demanded she pay customs duty to the tune of 19 percent of the value of the 1736 instrument, also known as “The Muntz,” if she wanted it back, said the foundation’s managing director Kinya Narabayashi.

It follows a similar incident earlier this year when Belgium-based Yuzuko Horigome had her 1741 Guarnerius violin, valued at $1.2 million, confiscated at the same airport on pain of a tax payment.

“This is clearly a problem. They (German officials) don’t have anything specific to tell us, like ‘if you have these (documents), you are OK’,” Narabayashi told AFP.

“The main mission of our foundation is to loan the best instruments to musicians all over the world. They (musicians) are actively travelling,” Narabayashi said.

The Muntz takes its name from a collector and amateur violinist, H. M. Muntz of Birmingham, England, who owned the violin in the late 1800s, the foundation said.

It is one of the last instruments made by Antonio Stradivari. It is in excellent condition and known for its tonal quality.

Horigome, who also lives in Europe but owns her instrument, had gone through Frankfurt airport a number of times without a hitch.

But in August, her insistence that the instrument was a tool of her work fell on deaf ears and German officers seized her violin.

The instrument was returned to Horigome last month after she presented a number of documents to German authorities, which were also contacted by the Japanese foreign ministry, according to the Asahi Shimbun.

“Even in Ms. Horigome’s case, she doesn’t know exactly what (the German customs) needed to release the instrument,” Narabayashi said.

“Of course we are in touch with Ms. Horigome. We are using all channels available to solve this issue,” he said.

Janke, born in Munich to a German father and a Japanese mother, has won a number of German and international prizes.

The foundation told the Asahi Shimbun that governments around the world should create passports for treasured instruments to ensure their smooth cross-border passage, particularly for soloists.

The foundation, established in 1974, owns 20 top string instruments such as those created by Stradivari.

The foundation receives funding from the Nippon Foundation, a non-profit giant that uses proceeds from motorboat racing for cultural, medical and philanthropic causes and ocean-related charitable projects.