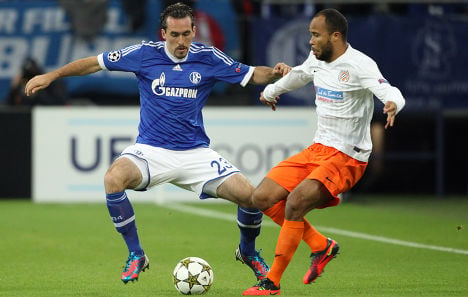 Schalke were 2-1 up and cruising to their second Champions League win of the season when Senegal international Camara stunned the Veltins Arena crowd with a curling effort round Royal Blues goalkeeper Lars Unnerstall.

“We dominated the game, but at the moment we just can’t decide games. That hurts,” fumed Schalke captain Benedikt Hoewedes after the final whistle while goal-scorer Klaas-Jan Huntelaar agreed: “We played with too much fear”.

“I do not know if this is justice, but in any case it’s nice to get a point,” said Camara.

“It was a great game against a great team, but now we have to keep improving.

“The red card (offence) wasn’t obvious, but we did not give up and kept working. I am happy for the team and myself, we deserved it.”

His equaliser earned his team their first Champions League point and leaves Arsenal top of Group B on six points after their 2-1 win over Olympiakos.

Montpellier’s Morocco forward Karim Ait-Fana had given his side an early lead, but Schalke teenager Julia Draxler equalised – he only turned 19 at the beginning of last month and became the youngest ever German scorer in Champions League history.

The game turned Schalke’s way in the 52nd minute with the score locked at 1-1 when Garry Bocaly felled Draxler in the area and Russian referee Sergey Karasev showed no hesitation in awarding a penalty and showing a red card.

Draxler had to be taken off in obvious discomfort after landing heavily on his arm and Holland striker Klaas-Jan Huntelaar slammed the penalty into the bottom left hand corner to put the hosts ahead for the first time.

Ait-Fana had given the visitors the initiative when he curled in a goal from distance with only 13 minutes gone.

But Draxler, who has been on the fringes of the Germany team, levelled.

Huntelaar’s pass split the defence to put Draxler into space and the teenager darted around Montpellier goalkeeper Geoffrey Jourdren before he slotted home.

The hosts started to exert their authority and despite a split share of possession finished with 19 shots on goal compared to the French team’s four.

The Dutch striker, the Bundesliga’s top scorer last season, squandered a golden chance to score the Royal Blues third with 88 minutes gone when he fired just wide seconds before Camara finished off the decisive counter-attack.

“You could say that we dropped two points, but we have four points under our belt already and we just need to keep going strong,” said Schalke coach Huub Stevens.

PARTNER CONTENT
Would your career benefit from an EMBA?