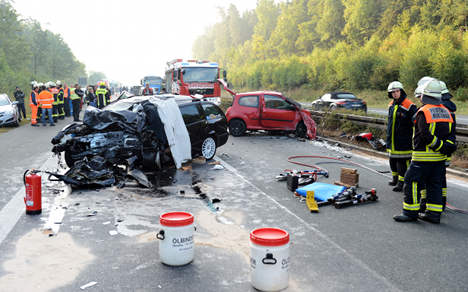 The 31-year-old woman was, for unknown reasons, driving the wrong way down a motorway in Bavaria on Tuesday morning when she hit another vehicle front-on. The woman, her seven-year-old daughter and the driver of the on-coming vehicle, a 25-year-old man, all died.

A second daughter, aged four, was also in the car and survived the crash. She is reported to be in critical condition in hospital. Police said they did not know if any of the passengers were wearing their seat belts.

Why the driver, who was from the town of Coburg, was naked remains unclear but a police spokesman confirmed on Wednesday that investigators do not believe she was trying to kill herself.

“There was no suicide note,” a spokesman told the Bild daily.

Instead, they think she must have been suffering from a psychotic episode. A family argument was also ruled out. The woman was divorced from the father of the children but that is unlikely to have triggered her behaviour, a spokesman said.

“Figuring out why it happened would be very difficult,” he added, as the incident “was not a typical one.”