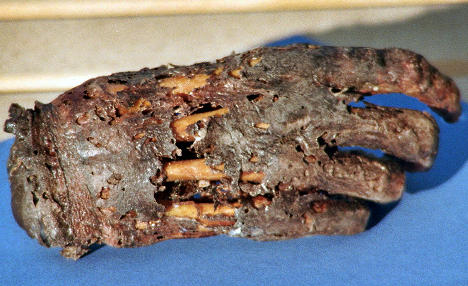 The “perjury-hand” had been safe in a wooden box above the font in St Brigida church, Legden, North Rhine-Westphalia, since 1905.

The legend is that the hand was chopped off a liar, but it had always been a mystery as to who the liar had been – and what the lie was that led to such a punishment.

Police are hunting for the hand but are at a loss to who took it, or why. It was first noticed missing on Sunday. “Who would do such a thing?” asked Janning.

The Legden cultural society had just raised enough money to send the hand to Düsseldorf University for tests to find out how old it was and if it belonged to a man or woman.

It was originally found during the demolition of an old fortified tower in 1907, having been preserved in the chalky limestone which was disturbed during the work. It has been in St Brigida since then.