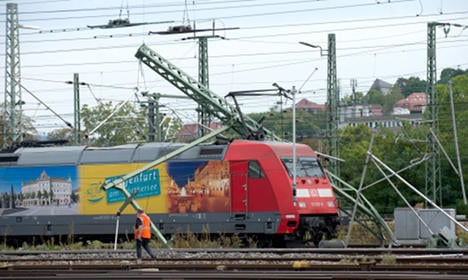 But trains travelling from the south through Stuttgart heading to northern Germany were still not being sent through the station, a police spokesman said.

Saturday’s accident was the second in three months, the Stuttgarter Zeitung reported on Sunday.

According to local police information, the intercity train heading to Hamburg derailed around 11:40am, just after it left Stuttgart’s main station.

Of the 12 injured, five were brought to area hospitals and seven were treated on site. There were about 230 people on the train at the time of the accident.

Most service, except for the south to north trains, was restored to the station on Sunday morning. No immediate cause for the derailment was released but an investigation remains ongoing.

Another intercity traveling to Hamburg in July derailed at apparently the same place, the paper wrote. That accident also involved several carriages jumping the tracks, but the July incident caused no injuries. It did however disrupt train travel for days.

The Saturday accident resulted in a complete closure of the Stuttgart train station for hours, forcing detours and hours of delays for thousands of passengers.

Rescue efforts were hampered as the train hit an overhead line. “The accident location had to be completely grounded so that the remaining electricity in the overhead line could be let out before the rescue efforts could begin,” a police spokesman told the paper.