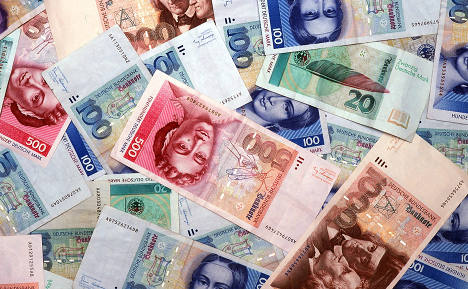 The men came across a strange-looking sack on Thursday while were digging into foundations on a building site.

“At first I thought that it could have been the last resting place for a cat and I was creeped out about opening it,” said the man operating the digger. His colleagues were less hesitant though and ripped into the sack.

It was packed full of old D-Mark notes, all wrapped in plastic, the Main Post newspaper said.

And although some had turned to mulch, the notes which can be identified can still be converted, despite the fact that the euro was introduced to the country in 2002. It is thought the old cash could be worth more than €50,000.

Soggy paperwork in the bag could see the money being reunited with its rightful owner, as it may contain bank details the paper said. Whether they still lived in the Main-Spessart area where the discovery was made, remained to be seen.

For now, the money has been claimed by the land owner but it is not yet clear who is entitled to the cash. If authorities manage to track down the money’s original owner the labourers could receive a finder’s fee.

The men forgot to tell the police at first though, because “we were way too excited to think about something like that.”